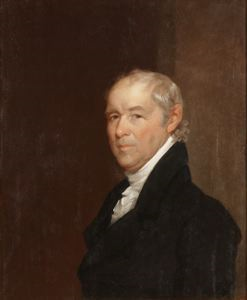 
This portrait, and the companion portrait of Benjamin's wife Sarah Tappan (1983.2.1), are later versions of works that are in the permanent collection of the National Gallery of Art in Washington, D.C. Stuart, who is best-known for his portraits of President George Washington, made the original works in 1814 by commission of the couple's son, Lewis Tappan. The commission is documented in diaries kept by Lewis, now in the Library of Congress, in which he notes that he paid Stuart $200.00 on November 4th, 1814, for the portraits of his parents. This second set of portraits were not documented by Lewis, but he had nine siblings, so most likely these were produced for one of them or another family member.

Benjamin Tappan was a gold- and silversmith, and a prominent member of the community in Northampton, Massachusetts.

Portrait of Sarah Homes Tappan
1983.0002.0001
Portfolio List Click a portfolio name to view all the objects in that portfolio
This object is a member of the following portfolios: