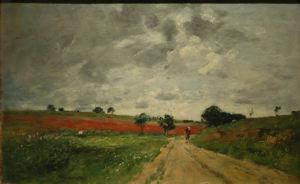 
The solitary figure in "Road in Countryside" emerges from a bend in a rural road that lacks recognizable landmarks. The artist, Eugene Louis Boudin, provides no clues as to the figureâs destination, nor the purpose of his travel. By showing neither the beginning nor the end of the road, Boudin creates a sense of infinity and timelessness. Perhaps, the artist is suggesting the never-ending labors of the countryâs peasants, or the slow evolution of the way of life for rural residents. For the nineteenth-century viewer, the stark, barren landscape would have been seen in juxtaposition to the emergence of urban life, and the rise of manufacturing and commerce, versus the agrarian way of life that dominated for centuries. In contrast to this sense of a world out of time, the sky suggests the oppositeâthe impending storm emphasizes the inevitability of change wrought by the passage of time. The painter was a proto-Impressionistâhe influenced the work of Claude Monet (French, 1840-1926) by emphasizing the importance of painting outdoors and on-site to capture the fleeting effects of light and color in nature.

Keywords Click a term to view the records with the same keyword
Figure
Fields
Path
Cloudy Sky
Clouds
Portfolio List Click a portfolio name to view all the objects in that portfolio
This object is a member of the following portfolios:

Your current search criteria is: Object is "Road in Countryside".