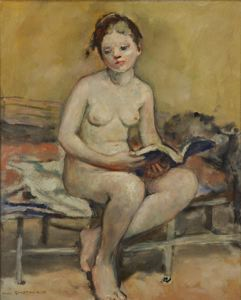 
Anne Goldthwaite was from Montgomery, but spent most of her adult life in New York city where she made her living as a professional artist. Goldthwaite's subjects were quite eclecticâshe was inspired by people, places, and events, making etchings, lithographs and drawings as well as oil paintings. Typically for an artist trained in a traditional art school environment, she utilized nude models for practice in depicting the human form. This image of a adolescent girl epitomizes Goldthwaite's painting style, with an emphasis on the brushy application of the medium to sublimate detail to form. She was more exacting in her depiction of the young girl's facial features.

Keywords Click a term to view the records with the same keyword
Book
Nude Female
Portfolio List Click a portfolio name to view all the objects in that portfolio
This object is a member of the following portfolios:

Your current search criteria is: Object is "The Nude".