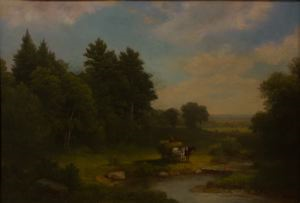 
Asher Durand was widely acclaimed as one of the earliest of America's great landscape painters. He was known for his dedication to realism and accuracy in the depiction of natural forms. Although he was known for his devotion to a detailed style, he also practiced in a vein that was more Romantic, inspired by his love of earlier European landscape paintings by artists such as Claude Lorraine (French, 1604-1682). "Rural Landscape with Hay Wagon" functions in this more conventional Romantic manner. The hay wagon and its driver, as well as the wooden bridge, indicate a useful but benign human engagement with the natural world. Pristine forests and streams became much less common in the northeastern United States after the Civil War, when towns and cities expanded to overwhelm the pastoral landscape, and paintings such as this were appreciated as reminders of a simpler past.

Keywords Click a term to view the records with the same keyword
Landscapes
Horses
Forest
Stream
Bridge
Sun
Farming
Laborers
Cloudy Sky
Portfolio List Click a portfolio name to view all the objects in that portfolio
This object is a member of the following portfolios:

Your current search criteria is: Object is "Rural Landscape with Hay Wagon".