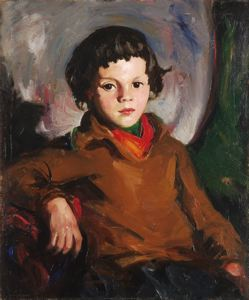 
"Young Chevass" is a late work created during a summer visit to Achill Island, Ireland in 1925. The subject of the painting, Mary Ann Cafferty, was one of Henri's favorite models, and he painted her a number of times. The origin of the name "Young Chevass" in the painting's title is unknown, though it appears to have been a family nickname for Mary Ann. The painting is representative of Henri's Irish portraits in its emphasis on the character of the model, use of a dark palette with bright accent colors, and use of abstract background elements. Also typical of his Irish portraits is the choice of a child as subject. One commentator has suggested that his repeated use of the same subjects in these later works freed him to explore formal problems.

Keywords Click a term to view the records with the same keyword
Portraits
Figure
Female
Child
Scarf
Portfolio List Click a portfolio name to view all the objects in that portfolio
This object is a member of the following portfolios: