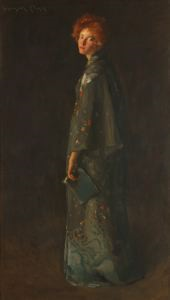 
"Girl with a Book" was presented to MMFA in 1941 as a gift of Louise Lyons Heustis (American, 1865-1951), who was a student of William Merritt Chase. A newspaper account dated December 1, 1910 from the "Mobile Register" states that Heustis obtained the work, which Chase painted as a demonstration piece, as a prize. The model is unknown, but is most likely another of Chase's students. The Chase Archives has a photo of this work taken by the artist Frank Wadsworth, who was a student at Chase's Shinnecock Hills summer school in the summer of 1902, when it is believed that Chase made this work as an instructional exercise.

Chase embraced a method of rapid working as a replacement for the more staid European approach to portraiture. He argued and presented this point through âpainting demonstrationsâ of works such as "Girl with a Book", which combined dark and luminous tonalities with the immediacy of vibrant brushwork. Dressing the model in a kimono is reflective of a fascination with Oriental imagery apparent in Chaseâs work dating from the 1880âs.

Keywords Click a term to view the records with the same keyword
Figure
Female
Chinoiserie
Book
Kimono
Portfolio List Click a portfolio name to view all the objects in that portfolio
This object is a member of the following portfolios:

Your current search criteria is: Object is "Girl with a Book".