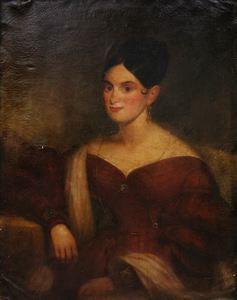 
C.R. Parker was a peripatetic portraitist, an artist whose shadow âflits and strutsâ across the southern stage for more than three decades prior to the Civil War. He may have been born in England, but nothing is known of him until several of his large-scale portraits of statesmen were unveiled in the Louisiana statehouse in 1826. He was in New Orleans in 1826, 1832, 1838, 1845-46; Mobile in 1840, 1843, and 1844.

According to Issac Monroe Cline, who sold this portrait and the pendant portrait, her husband Louis Mouton, to the Museum in 1940, Mrs. Mouton was born Carmelite Dugas, presumably in or near New Orleans. Nothing more is known of her except that she was married to Louis Mouton, who Cline identified on the reverse of his portrait as âthe Hon.â Typically, such a title refers to a judge or elected official. Attempts to identify the Moutons have been unsuccessful. Neither is listed in the Dictionary of Louisiana Biography. If Cline knew anything of their family history, he failed to communicate it with the portraits.

Keywords Click a term to view the records with the same keyword
Portraits
Female
Jewelry
Fashion
Necklace
Portfolio List Click a portfolio name to view all the objects in that portfolio
This object is a member of the following portfolios:

Your current search criteria is: Object is "Portrait of Mrs. Louis Mouton".