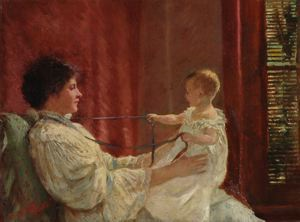 
After his return from art study in Europe, Frederick Freer settled in New York in 1880. In 1886, he married a fellow painter, Margaret Cecilia Keenan. Eventually the Freers had seven children, and his family became Freer's primary subject. Almost certainly, this painting depicts Margaret Freer as a young mother with one of her infant children.

Although he had trained at the Munich Academy where he learned a style more heavily influenced by the Old Masters, this painting reflects Freer's knowledge of the more contemporary style of Impressionism. Freer had traveled to Paris with William Merritt Chase in 1883, and the work of both artists suggests that the techniques and subjects of the French Impressionists inspired them. Here Freer has captured the soft glow of the diffused light from the window as it illuminates and enriches the colors and textures of the sitters' skin and clothing, as well as the lurxious fabrics of the upholstry and drapery. Using short strokes of paint to build up and model the form in the work, the artist creates a gentle domestic scene that focuses on maternal love and warmth.

Keywords Click a term to view the records with the same keyword
Figure
Female
Genre
Mother
Child
Chair
Window
Portfolio List Click a portfolio name to view all the objects in that portfolio
This object is a member of the following portfolios:

Your current search criteria is: Object is "Mother Playing with Baby".