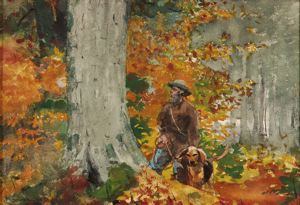 
Homer first visited the Adirondacks in 1870, when railroad access had made this part of northern New York State a popular destination for wilderness tourism. An avid outdoorsman and fisherman since childhood, he traveled to the Adirondacks periodically over a period of some thirty years.

Most of the Adirondack subjects were painted between 1889 and 1894, and this example is one of thirty-two works produced during stays in the spring and fall of 1889. Studied as a group, many of these watercolors form a narrative sequence focusing on the hunting of deer using dogs. The figure depicted here is believed to be Rufus Wallace, an experienced wilderness guide who appears in a number of works by Homer. The guide leads the dog into the woods and, at the appropriate time, will release the animal from his leash so that it may chase deer toward waiting hunters. The coloration suggests that Homer made this painting during his fall visit, between 1 October and 24 November 1889.

Keywords Click a term to view the records with the same keyword
Animals
Dogs
Figure
Male
Forest
Hunting
Aged
Tree
Sports
Fall
Portfolio List Click a portfolio name to view all the objects in that portfolio
This object is a member of the following portfolios:

Your current search criteria is: Keyword is "HI" and [Object]Century is "Nineteenth Century".