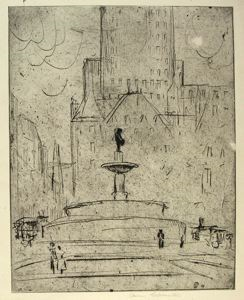 
While the Plaza Hotel dominates the skyline of the southern portion of Central Park, Goldthwaite chose to focus her attention on the Pulitzer Fountain in Grand Army Plaza, just between the hotel and the entrance to the park. This fountain was a gift of newspaper magnate Joseph Pulitzer, who left a sum of $50,000 for its construction. In 1916, the fountain was installed, complete with a graceful bronze sculpture of the Roman goddess of abundance, Pomona, designed by sculptor Karl Bitter.
SM 4/20/09

Keywords Click a term to view the records with the same keyword
Buildings
Fountain
Portfolio List Click a portfolio name to view all the objects in that portfolio
This object is a member of the following portfolios:

Your current search criteria is: Object is "The Plaza".