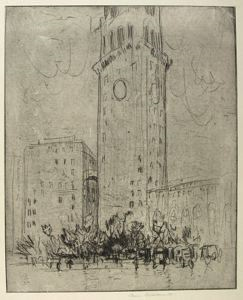 
The massive Metropolitan Life Insurance Building, which was the tallest building in the world upon its completion in 1909, dwarfs the adjacent Madison Square Park in this Goldthwaite etching. The park, which was one of the cityâs oldest public spaces, served as a sanctuary for one of Manhattanâs most elite and active neighborhoods during the 19th century. It provided a place to display Americaâs first community Christmas Tree and continues to house the Eternal Light Monument, which was designed to commemorate the WWI Armistice. Goldthwaiteâs print emphasizes the importance of this small piece of nature in an encroaching urban jungle.
SM 4/20/09

Your current search criteria is: Object is "Madison Square".