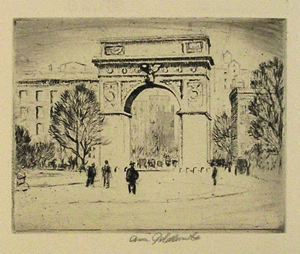 
The original Washington Arch, commissioned in 1889 to celebrate the Centennial of George Washingtonâs inauguration, was a temporary plaster monument. The 1892 version, designed by renowned architect Stanford White, permanently stands in the middle of Washington Square Park. Located in the Greenwich Village area of New York City, this former cemetery-turned-park became an urban oasis during the second half of the 20th century. In this print, Goldthwaite idealizes the serenity of the scene, as cars would normally have been hurrying around the Roman-inspired marble arch.
SM 4/20/09

Keywords Click a term to view the records with the same keyword
Tree
Architectural Monuments
Portfolio List Click a portfolio name to view all the objects in that portfolio
This object is a member of the following portfolios:

Your current search criteria is: Object is "Washington Square".