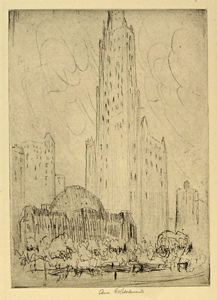 
The changing skyline of Lower Manhattan in the twentieth century was a popular subject for artists. As âprogressâ encroached on these historic neighborhoods, architectural tastes shifted from the traditional to the modern and the cityâs growing population necessitated the demolition of buildings that had existed for decades. In this print, Goldthwaite captures one of the many buildings that fell victim to changing tastes and expanding boundaries. In Lower New York, Goldthwaite focuses on the juxtaposition between the tallest building in the world at the time, the Woolworth Building, and the French-influenced Post Office building, which was located at the tip of City Hall Park in Lower Manhattan. The Post Office was razed in 1938.
SM 4/20/09

Keywords Click a term to view the records with the same keyword
Cityscapes
Portfolio List Click a portfolio name to view all the objects in that portfolio
This object is a member of the following portfolios:

Your current search criteria is: Object is "Lower New York".