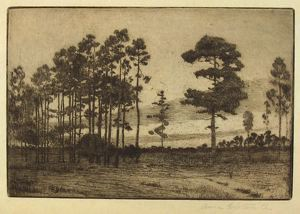 
Anne Goldthwaite spent most of her professional career as an artist in New York City, but many summers she made the trip to Alabama to visit her family in Montgomery. She was known to spend much of her free time while she was in the South making sketches and paintings, and she came to be known in New York art circles as a painter of Southern subjects.

"Southern Pines" is an etching made early during the early period of her work as a printmaker. She made more than 300 prints (both etchings and lithographs) between the years 1912 and 1942, depicting a tremendous range of subjectsâfrom landscapes such as this one, to portraits, genre scenes, animal subjects, and many others. This work, sometimes also known as "Alabama Pines," shows a stand of pine trees. Large numbers of acres in central and south Alabama came to be devoted to the cultivation of pines, which were harvested for paper production.

Keywords Click a term to view the records with the same keyword
Landscapes
Tree
Portfolio List Click a portfolio name to view all the objects in that portfolio
This object is a member of the following portfolios:

Your current search criteria is: Object is "Southern Pines".