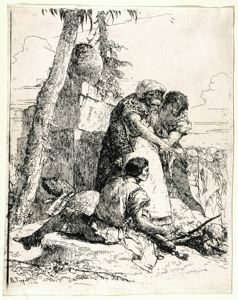 about 1750
From the series, Scherzi di Fantasia


Tiepolo's images from the "Scherzi di Fantasia" are thematically similar in their representation of figures and symbols associated with fantasy and magic. In this print, the artist has inluded an elderly magician, and at the lower left an owl. The owl was a symbol of knowledge, and in the eighteenth century specifically that knowledge associated with the Holy Inquisition of the Catholic Church. The burning pyre with a human skull also suggests ancient mysticism and divinations that, in the eighteenth century, were quickly giving way to societies of enlightened rationalism.

A Bacchante with Satyr and Fauness
1999.0007.0131.0023
Portfolio List Click a portfolio name to view all the objects in that portfolio
This object is a member of the following portfolios:

Your current search criteria is: Object is "Magician with Two Other Principal Figures Regarding a Burning Pyre...".