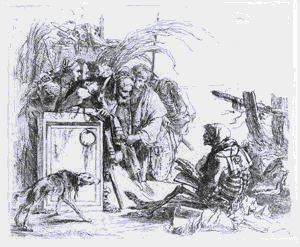 about 1743
From the series, Capricci


In "Death Giving Audience," a half-dozen people cower behind a wise man who leans on the entrance to a tomb and talks with a seated skeleton, a universal symbol of Death. A skull and what may be an extinguished candle, traditional memento mori emblems, are atop the tomb behind the group. A cautious dog looks on, emphasizing the humansâ attention that is riveted on Death. As in the other Capricci, the main theme is relatively clear, but specific meanings remain elusive, dependent on what the viewer brings to the image.

Soldier with Horse and Attendant
1999.0007.0130.0011
Portfolio List Click a portfolio name to view all the objects in that portfolio
This object is a member of the following portfolios:

Your current search criteria is: Object is "Death Giving Audience".