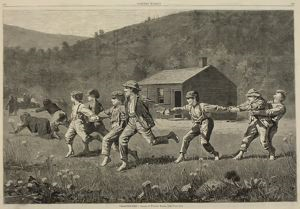 
Homer painted at least two versions of this composition, "Snap the Whip," in 1872âa large study now in the Metropolitan Museum in New York (50.41), and a larger, final version in the Butler Institute (919-0-108). He also made a number of studies related to the work, which depicts a group of children playing in a field in front of a rural schoolhouse. The wood engraving was published in "Harper's Weekly", September 20, 1873.

Because of the existence of the wood engraving, this composition is one of Homer's best known. Homer's intent in making the work has been fully analyzedâfrom the compositional contrasts of the shape of the line of boys with the hillside in the background, to the contrast of activities (education as represented by the schoolhouse and play as represented by the children's game), and the themes of cooperative relationships versus independence. Homer was 36 years old and entering the latter part of his life when this work was created, and thus it may represent the painter's salute to the innocence and freedom of childhood.

Keywords Click a term to view the records with the same keyword
Child
Hat
Grass
Summer
Leisure Activity
Portfolio List Click a portfolio name to view all the objects in that portfolio
This object is a member of the following portfolios:

Your current search criteria is: Object is "Snap the Whip".