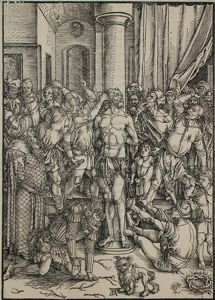 
"The Flagellation" is one of the earliest prints Durer executed for the "Large Passion" (about 1496-1497). He encountered some difficulty in depicting the crowd of people, which is divided into two levels. Some proportions are awkward: Pilate, crowned with a turban and standing in the front at left, is dwarfed by the monumental figure of Christ, who is tied to a column. The spectators on the upper left appear to be a head shorter than Christ. However, Durerâs attention to the details helps to emphasize the emotional impact of the scene. There are a wide variety of facial types and dress. Durer did not generalize the facial features and his depiction of the figures approach portraiture. A dog, staring directly out at the viewer, adjacent to the artistâs monogram, adds an element of humor to the grim narrative. The boy blowing a horn at the far right is based on Durerâs drawing after Mantegnaâs "Battle of the Sea Gods". Durerâs woodblocks for the "Large Passion" enjoyed a long life after the 1511 edition, to which the Montgomery impression belongs.

Christ, Man of Sorrows, Mocked by a Soldier

The Agony in the Garden
1986.0001
Portfolio List Click a portfolio name to view all the objects in that portfolio
This object is a member of the following portfolios:

Your current search criteria is: Object is "The Flagellation".