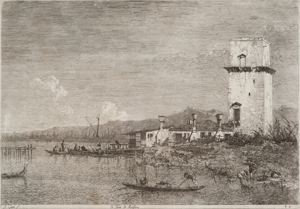 
The two most powerful and mature etchings in the "Vedute..." series are the large plates called "The Portico with the Lantern" (1985.4.7) and "La Torre di Malghera". The first describes a romantically imaginary yet solidly believable scene of modern life among ancient ruins; the second depicts a now lost 15th-century monument of the lagoon near Mestre set defiantly against the sea and sky. Both are works of great compositional and technical complexity that nonetheless convey effects of powerful simplicity. A wide range of etched linesâthick and thin, straight and curly, broken and continuousâvibrate in the creation of convincing atmospheric effects whether dealing with actual or invented sites. Canalettoâs depiction of the hot and humid atmosphere of Venice and its environs exceed all other plates in the series for coloristic effects. These two images alone would merit Canaletto a central position in the development of etching. Indeed, they rival his most successful painted achievements. The poetry of these scenes, and their evolution within the series of endlessly varied exploration of the medium and the subject, elevate the genre and the technique above all other similar work being done at the time.

The Portico with the Lantern
1985.0004.0007
Portfolio List Click a portfolio name to view all the objects in that portfolio
This object is a member of the following portfolios:

Your current search criteria is: Object is "The Tower of Malghera (La Torre di Malghera)".