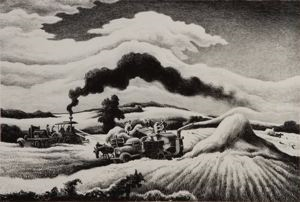 
Threshing is based on an oil and egg tempera painting made by Thomas Hart Benton in 1938â1939, titled Threshing Wheat. Like the painting, the print shows a favorite subject of Bentonâs: the evolution of the landscape as agricultural practices became mechanized, transforming the landscape of family farms into agribusinesses. The rolling hills under cultivation suggest small-scale farming; it contrasts with the broad, flat lands that were more conducive to large machines like the mechanical thresher.

Benton is one of the best-known of the American Regionalist painters, a style that was widely influential and successful into the mid-20th century. Regionalist painters like Benton embraced the imagery of the American Scene endorsed by the Federal relief agencies, fully engaged with the patriotic intent of praising the traditional histories of America as a great, prosperous society and world power.

Keywords Click a term to view the records with the same keyword
Farming
Laborers
Fall
Portfolio List Click a portfolio name to view all the objects in that portfolio
This object is a member of the following portfolios:

Your current search criteria is: Object is "Threshing".