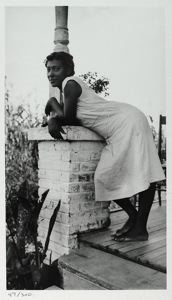 All of the images being offered for sale were from the period just before her commitment to writing full time, and just after the start of the depression. These photos demonstrate the snapshot style for which Welty has been commended. Saturday Off, Jackson is the only one of the five images to have been reproduced in Weltyâs first photography book, One Time, One Place: Mississippi in the Depression, as well as subsequent publications

Your current search criteria is: Object is "Saturday Off, Jackson, Mississippi".