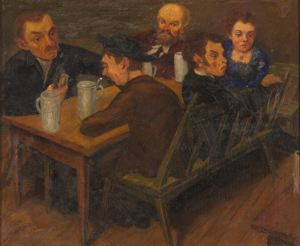 
Walt Kuhn's works from the first decade of the twentieth century, including "Albigâs", reflect the influence of Robert Henri and his followers. Albigâs was a restaurant located in Fort Lee, New Jersey, where Kuhn rented a house on the banks of the Hudson River. The community was convenient to Manhattan yet offered a respite from the cityâs hectic pace. The figures in the painting have not been firmly identified, but they are most likely artist friends who occasionally joined Kuhn in Fort Lee. The woman is thought to be Mrs. Albig, the proprietorâs wife, and the man at the far left of the canvas, facing toward the viewer, may be Henri himself.

Keywords Click a term to view the records with the same keyword
Portraits
Female
Figure Groups
Male
Saloon/Bar
Bench
Leisure Activity
Necklace
Portfolio List Click a portfolio name to view all the objects in that portfolio
This object is a member of the following portfolios:

Your current search criteria is: Object is "Albig's".