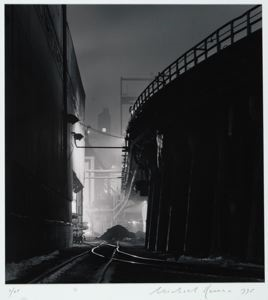 
'This image depicts a portion of Ford Motor Company's River Rouge automobile plant in Dearborn, Michigan and is one of an extensive series of photographs of this site. Kenna's initial inspiration for the series was Charles Sheeler's photographs of the Rouge plant taken in 1927. Kenna began photographing the plant during a visit to Detroit in December of 1992 and completed the series during twelve separate trips from 1992 to 1995. He photographed the plant at all hours, though he preferred to photograph the factory at night, and with exposure times ranging from a fraction of a second to four hours. All of the Rouge prints are sepia-toned silver gelatin prints.

Keywords Click a term to view the records with the same keyword
Cityscapes
Industrial
Tracks
Portfolio List Click a portfolio name to view all the objects in that portfolio
This object is a member of the following portfolios:

Your current search criteria is: Object is "The Rouge, Study 97, Dearborn, Michigan".