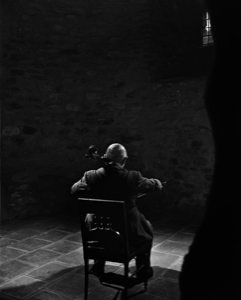 
Pablo Casals (1876â1973) The second day of Karshâs portrait session with the elderly Spanish cellist was set in an ancient, barren abbey near his tiny home. One bare light bulb and the photographerâs strobe lights were the only illumination save a glimmer from a single, small, high window in the stone walls. Karsh studied Casalsâ hands and face while he played, eyes closed, deep in concentration. Then he decided to photograph the musician from the back, immersed in the dark, cold, stone interior that throbbed, as Karsh said, âwith music only he can play.â

Keywords Click a term to view the records with the same keyword
Portraits
Male
Musician
Musical Instruments
Chair
Cello
Portfolio List Click a portfolio name to view all the objects in that portfolio
This object is a member of the following portfolios:

Your current search criteria is: Object is "Pablo Casals".