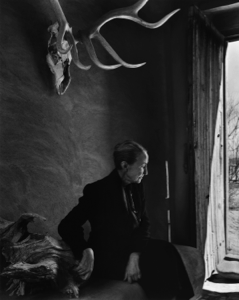 
Georgia OâKeeffe (1887â1986) OâKeeffe was the best-known female American painter of the twentieth century. In 1916 she met Alfred Stieglitz, a pioneering photographer and advocate of modern art, who she soon married. In 1929 she visited Taos, returned frequently during the 1930s, and settled in New Mexico after Stieglitzâs death in 1946. She enjoyed retrospective exhibitions at the Art Institute of Chicago and the Museum of Modern Artâtheir first for a womanâand the Whitney Museum cataloged her work. Karsh photographed OâKeeffe at Ghost Ranch, her home in New Mexico. His study of her hands echo those Stieglitz had made earlier.

Keywords Click a term to view the records with the same keyword
Portraits
Female
Artist
Portfolio List Click a portfolio name to view all the objects in that portfolio
This object is a member of the following portfolios:

Your current search criteria is: Object is "Georgia O'Keeffe".