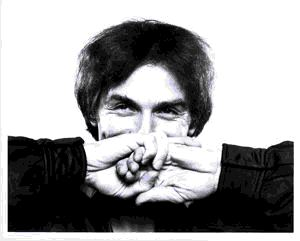 
Rudolf Nureyev (1938â1993) In 1958 Nureyev became a soloist with the Kirov Ballet but he defected from Communist Russia in 1961, subsequently making the Royal Ballet in London his base in 1962. Nureyev was noted for his powerful stage presence, exceptional athletic skill, and fiery grace. Nureyevâs portrait sitting occurred in Ottawa when he was guest artist with the National Ballet of Canada. In Karsh: A Fifty-Year Retrospective (1983), the photographer said he jokingly asked âto see those sensuous lips of yoursâ¦. Puckishly, mischievously, he covered his mouth, and smiled with his eyes.â

Keywords Click a term to view the records with the same keyword
Portraits
Male
Ballet
Portfolio List Click a portfolio name to view all the objects in that portfolio
This object is a member of the following portfolios:

Your current search criteria is: Object is "Rudolph Nureyev".