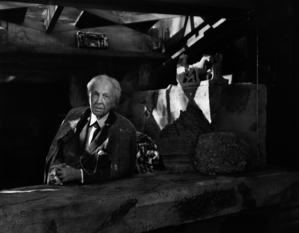 
Frank Lloyd Wright (1867â1959) When Karsh first photographed the most famous architect of the twentieth century in New York in 1946, he posed with a fashionable, lit cigarette in hand. When Karsh made this portrait at Taliesin West in 1954, Wright had stopped smoking and complained, âI shall never live that portrait down.â Three years after Wright died, Karsh published In Search of Greatness and told about one of Wrightâs students who purchased a 1946 portrait from Karsh and sent it to Wright for his autograph. Wright signed itâand cut the cigarette from the photo.

Your current search criteria is: Object is "Frank Lloyd Wright".