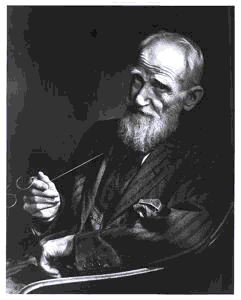 
George Bernard Shaw (1856â1950) Shaw was an Irish playwright, novelist, and critic. His dramas like Saint Joan, Major Barbara, Pygmalion, and Arms and the Man are classics of the modern theater. Shaw was awarded the Nobel Prize in Literature in 1925. Karsh remarked that the playwrightâalthough 87 when this photograph was takenâhad a youthful and witty quality about him. Shawâs manner, penetrating eyes, flashing wit, and bristling beard awed Karsh.

Keywords Click a term to view the records with the same keyword
Portraits
Eye Glasses
Beard
Suit
Portfolio List Click a portfolio name to view all the objects in that portfolio
This object is a member of the following portfolios:

Your current search criteria is: Object is "George Bernard Shaw".