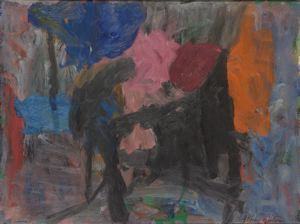 
Philip Gustonâs "Road" is a striking example from a sixteen-year period in which the artist created abstract compositions. The central focus of "Road" is a large black mass of angular brushstrokes that appear as if they are trying to configure into recognizable form. Pockets of red, orange, blue, and green surround the central black mass. Overall the painting has a gray-blue tone. However, dark blues, greens, oranges, blacks, and reds are visible underneath the gray washâan indication that Guston worked and reworked the painting before adding the final layers of color.

Sometime after itâs completion in 1959, Guston consigned "Road" to the Sidney Janis Gallery in New York. The Gallery held a Guston exhibition from December 28, 1959 until January 23, 1960. While "Road" was not included in the exhibition, it was available at the Gallery for sale. The painting did not sell, and was eventually returned to the artist. "Road" then remained in Gustonâs home or studio until after his death, when the estate gave it to the David McKee Gallery in New York on consignment. It was then bought by the Montgomery Museum of Fine Arts.


Keywords Click a term to view the records with the same keyword
Abstraction
Portfolio List Click a portfolio name to view all the objects in that portfolio
This object is a member of the following portfolios:

Your current search criteria is: Object is "Road".