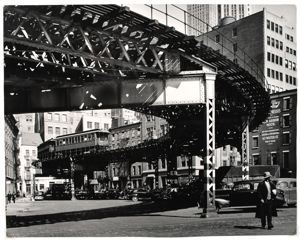 
This photograph is a vintage print made from a negative dating from 1940; the time period just after Feininger arrived in New York. Initially, he explored the oldest part of Manhattan on the Lower East Side. The area depicted is just to the East of Battery Park on Water Street and Coenties Aly, where the train begins to turn back away from the East River. This area, called the Coenties Slip Curve, was between the South Ferry and Hanover Square stops, and was part of the now razed Third Avenue El line (ceased May 12, 1955).

This particular image capitalizes on the detached formalism for which was Feininger recognized, combining his interest in both innovative darkroom techniques and his appreciation of architectural contrasts. The photograph has been ferrotyped, a technique which burnishes the surface of the emulsion, leaving it highly reflective. It also features Feiningerâs own enlarging and exposure notes on the verso, which indicate the exposure time for each of the four areas within the composition: the train tracks, the buildings, the foreground and the upper sky area. It was through these sketched out instructions that Feininger could ensure that he would achieve the most beneficial exposure and resulting technically accurate print each time.

Keywords Click a term to view the records with the same keyword
Cityscapes
Trains
Tracks
Automobile
Train
Skyscraper
Portfolio List Click a portfolio name to view all the objects in that portfolio
This object is a member of the following portfolios:

Your current search criteria is: Keyword is "I" and [Object]Object Type is "Photograph".