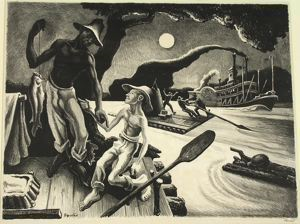 
"Huck Finn" was originally composed as a painting included in the mural titled "A Social History of Missouri" for the House of Representatives Lounge in the Missouri State capitol commissioned in 1935 and executed in 1936. The elongated figures, billowing steam, leaning tree, and rippling water give the composition a feeling of flowing movement that is often seen in Regionalist works. This style and sense of movement is common in Bentonâs mature work.

The original "Huck Finn" composition in the Missouri mural was converted into lithographic form on zinc plates in 1936 as part of a series based on these murals (The Missouri State Capitol Mural Series, Fath, cat. nos. 10-13). The Museum's impression is from the published edition of 100, distributed by Associated American Artists in New York.

Keywords Click a term to view the records with the same keyword
Male
Figure Groups-Men
Child
River
Fishing
Fish
Tree
Laborers
Turtle
Steamboat
Literary Characters
Fighting
Moon
Portfolio List Click a portfolio name to view all the objects in that portfolio
This object is a member of the following portfolios:

Your current search criteria is: Object is "Huck Finn".