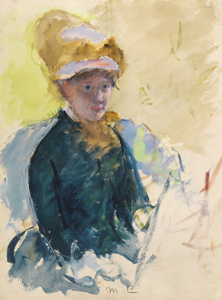 One of art historyâs best-known and most respected female artists is the American painter Mary Cassatt. A friend and colleague of the French Impressionist painters, she was recognized primarily for her late-nineteenth century paintings of women and children in domestic environments. She was also a successful and respected printmaker, and a prominent member of the art world in Paris at the turn of the twentieth century.

Mary Stevenson Cassatt was born in 1844 to a well-to-do Pittsburgh, Pennsylvania family. Her father, Robert Cassatt, founded Cook and Cassatt, a mercantile shipping company in 1829, and his business prospered. He was elected Mayor of Allegheny City, Pennsylvania in 1847. After his retirement, in 1851, Cassatt and his wife Katherine Kelso Cassatt took their family of five children to Europe until 1855. (1) Mary was thus raised in Europe, as well as in West Chester, and Philadelphia, Pennsylvania.

As a young girl, Cassatt determined that she wished to pursue a career as a professional artist, and, with the support of her parents, she set about getting the necessary training to do so. In 1860, at the age of sixteen, she enrolled in the Antique Class at the Pennsylvania Academy, one of the few quality art schools in the United States at that time. As a female art student her opportunities were limited, and after a few years study in the basic academic modes of drawing from casts and copying other works, Cassatt determined that her training was inadequate to her goals, and she sought instruction in Europe. The major art schools attracting Americans in the nineteenth century were the academies in Paris, and others located in Germany, and so Cassatt went to Paris in late 1865 where she began private art lessons. She traveled to Italy, Spain and the Netherlands to study works by the European Old Masters, and for a time in 1871, she studied and worked in Parma, Italy. (2)

In the spring of 1874, what was later recognized as a landmark event in the history of art occurred in Parisâthe first group exhibition of artists then called âThe Independentsâ but later known as the French Impressionists. By this time Cassatt had won acceptance for three consecutive years into the annual Paris Salon exhibitions, the traditional rite of passage for young artists who sought entry into the ranks of the professionals. Her acceptance into the Salons publicly ratified her talent, and conveyed the credentials that would have gained her recognition had she chosen to return and make a career at home in the United States. However Cassatt recognized the limitations that the established art world of the period placed upon her working style and upon her personally, knowing that these limitations would be even more pronounced if she were to return home. Ambitious of artistic success on her own terms, Cassatt found the inspiration she sought in the group known as âThe Independentsâ, and specifically in the artist Edgar Degas.

Cassatt was a dedicated admirer of Degasâ work, particularly his drawings and pastels. Degas and Cassatt shared a respect for brilliant color and expressive form, rejecting the highly detailed and finished compositions favored by the academies. She indicated in later life that her chance encounter with some pastels by Degas in a shop window around the mid-1870s had forever changed her attitude toward her own work. âAt last I could work with absolute independence without considering the opinion of a jury. I had already recognized who were my true masters. I admired Manet, Courbet, and Degas. I hated conventional artâI began to live.â (3) Degas first encountered and admired Cassattâs work in the Salon of 1874. By 1877, he had taken the initiative in recruiting Cassatt to submit work for the exhibition of the Independents, prevailing upon her to discontinue exhibiting in the annual Salons. By doing so, Cassatt firmly aligned herself with the Impressionist group, and acknowledged that she would travel her own path to success in the art world, not in the United States, but in Paris. (4)

Cassatt set up a permanent household in Paris in 1877, joined by her sister Lydia and their parents. Her first exhibition with the Impressionist group was in the spring of 1879. From this point forward, her association with the Impressionists was her primary affiliation and she formed a close and productive working relationship with Degas. The Impressionists were primarily recognized for their painting methods and subjects, i.e., depictions of landscape, many painted on site, a plein air. Cassatt, however, made her reputation as a figure painter, primarily of women engaged in daily activity. In her mature work, painted during the 1880s and 1890s, she was most closely associated with paintings of women and children in domestic environments.

Your current search criteria is: Artist/Maker is "Mary Cassatt".