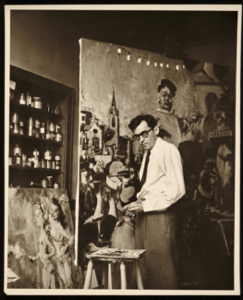 Despite strong individual exceptions, social commentary did not play a major role in twentieth-century art. Jack Levine, however, has not shirked what he sees as his responsibility to American painting: âThereâs got to be a message to all artâ¦. I stand or fall on this basis.â(1) Levineâs art and its message are characterized by a biting satire that reveals the inherent weaknesses in human nature and the institutions that share the faults of their creators. Alienated from abstraction, the primary fine-art mode of the past fifty years, Levine occupies a unique position based on his commitment to social responsibility through his brand of realism.

Raised in Bostonâs South End, Levine learned to be street-wise from an early age. In that neighborhood of immigrants, the variety of people and level of activity left a lasting impression. He saw power used and abused; the great American dream could suddenly become a nightmare, and in his art he reprised the observations of his youth. When Levine was eight, the family moved to Roxbury, a quiet residential neighborhood, and he began to take classes at Bostonâs Museum of Fine Arts. A naturally gifted draftsman, he was tutored and mentored by artists Denman Ross (1853â1935; the founder of Harvardâs art department) and Harold Zimmerman (1905â1941). These tutors encouraged Levineâs pursuit of drawing, supplemented by the study of painting techniques of the old masters, examples of which abounded at the Museum of Fine Arts and at Harvardâs Fogg Art Museum. By eighteen, Levine had become a professional artist.

As Levineâs work matured, so did his political attitudes. Spurred by the experience of poverty during the Great Depression, he became a social commentator. (2) He began to react angrily to what he saw as a failure of power and authority. His subjects were characters remembered from his youthâgangsters, prostitutes, policemenâand from the larger world of politicians, lawyers, military officials, and just about anyone else whose ethics could be corrupted. Treating themes related to hypocrisy, greed, and decadence, he developed an expressionist style to mirror his reactions to those concepts. His figures and their facial expressions are exaggerated to the point of caricature, at times conjuring horrific images of death and decay. (3)

(2) Levine worked under the auspices of the WPA from 1935 to 1937, when he was found ineligible because he lived with his parents. He was reinstated briefly, but discharged again in 1939. Kenneth W. Prescott and Emma-Stina Prescott, The Complete Graphic Work of Jack Levine (New York: Dover Publications, 1984), p. v.

(3) Levineâs art refers specifically to satirical art of the past in its content and its use of exaggeration. See Stephen Robert Frankel, ed., Jack Levine, intro. by Milton Brown and commentary by Jack Levine (New York: Rizzoli, 1989), p. 13.

Little Waitress at the Tokyo Hilton

Untitled (sketch of geisha with fan)

Untitled (study of woman in restaurant)

Untitled (sketch of woman in restaurant)

Untitled (sketch of merchant with broom)

Untitled (study of men in ceremonial costumes and two boys)

Untitled (sketch of a praying couple)

Untitled (sketch of a couple praying under a canopy)

Untitled (sketch of a praying couple)

Untitled (sketch of a couple praying)

Untitled (sketch of man being fitted for suit)

Untitled (sketch of a couple and rickshaw puller)

Untitled (sketch of man with camera looking at Buddhist statue)

Your current search criteria is: Artist/Maker is "Jack Levine".