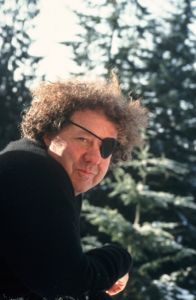 Dale Chihulyâis one of the most recognized names in contemporary art today. He was born in Tacoma, Washington in 1941. He studied interior design at the College of Puget Sound, architecture and weaving at the University of Washington. In 1965, he discovered glassblowing and immediately sought out Harvey Littleton, a pioneer in the Studio Gass Movement, at the University of Wisconsin, where Chihuly took a Master of Science degree in 1967. He continued his studies at the Rhode Island School of Design, earning a Master of Fine Arts degree, founding its glass program, and teaching there.

In 1969 he won a Tiffany Foundation grant and a Fulbright Fellowship to study glass making in Venice, becoming the first American artist to work in the legendary Venini glass factory. The peripatetic sculptor visited other European glass production centers before returning to the faculty at RISD. In 1971 he founded the Pilchuck Glass School (initially a small, commune-style, summer program) on a farm 50 miles north of Seattle. In 1980, when his sales exceeded his salary at RISD, he resigned and relocated to the Pacific Northwest year round.

Since then, he has continued his involvement in Pilchuck and operated his own studio (the 25,000 sq. ft. Boathouse) with a growing number of assistants who have become essential to his ability to create the large and colorful concoctions he designs in drawings, paintings, and interactions with his collaborators.

Chihuly lost the sight in his left eye in an automobile accident in 1976 and dislocated his shoulder in 1978. Consequently, he depends on the depth perception and physical dexterity of others to see the three-dimensional forms and to handle the heavy molten glass that is transformed into colorful organic shapes, many of which are fitted together in colossal assemblages that are supported on steel armatures, suspended from ceilings and bridges, or floated on water in some of the most innovative site-specific sculptures ever produced.

Your current search criteria is: Artist/Maker is "Dale Chihuly".