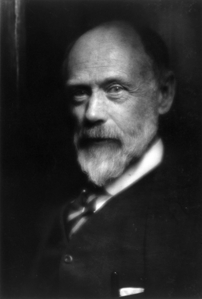 Herbert Adams was born in West Concord, Vermont and grew up in Fitchburg, Massachusetts, for which he created a bronze fountain of two boys playing with turtles in 1888.* After studies at a technical school in Worchester and at the Massachusetts Normal Art School in Boston, he journeyed to Paris to study with Antonin Mercie at the Ecole des Beaux Arts from 1885-90. There he achieved renown for innovative busts of women that helped define the ideal of feminine beauty at the turn of the century. At the Columbian Exposition in 1893, he displayed Primavera, Saint Agnes, and a portrait of Adeline V. Pondâwho would become his wife and an insightful critic of American sculpture. Adams tinted the marble of these busts to achieve a warmth and life-likeness that was totally absent from the work of his mid-century Neoclassical predecessors. He added carved wooden elements, metal, and semi-precious stones to some busts (see the collections of the Metropolitan and Corcoran museums), giving them a richness that reflects the influence of the Florentine Renaissance and distinguishes them from other busts of the period.
Adams also created numerous public monuments and architectural sculptures. He collaborated on some of the most important Beaux-Arts projects of the age. He completed the doors of the Library of Congress that were left unfinished on the death of Olin Levi Warner, and he made doors for Saint Bartholomewâs Church and the American Academy of Arts and Letters, both in New York City. He also created the Victory for the Dewey Memorial Arch in New York City (1899), an important allegorical group for the Pan American Exposition in Buffalo (1901), and allegorical figures for the exterior of the Brooklyn Institute of Arts and Sciences. His William Ellery Channing (1911, Boston Public Garden), William Cullen Bryant (1902, New York Public Library Garden), and Joseph Henry (Library of Congress) compare with the best American statuary of the era.
In 1916 his Bethel granite Michigan Monument was dedicated on the battlefield at Vicksburg. At the base of a stout obelisk Adams placed a striding allegorical female figure whose windblown drapery resembles that of the garden nymph with water lilies he would create a decade later. The drapery and distant gaze of the Michigan Monument figure are similar to that of Adamâs Winchester, MA World War I Memorial (see Contemporary American Sculpture) and the Girl with Water Lilies. The cool, almost aloof, character created by the facial features of these memorial sculptures is quite the opposite of the warm glow that suffuses his early portrait busts.
Adamâs artistry was recognized by his contemporaries. A popular teacher at Pratt Institute in the 1890s, he was active in artistic circles of his day. He was an academician of the National Academy of Design and served as its president (one of only three sculptor presidents) from 1917 to 1920. He also belonged to the American Academy of Arts and Letters and served on the Metropolitan Museumâs advisory Committee on Sculpture from 1917 to 1921. He was a founding member of the National Sculpture Society and served as its president twice (1908-10 and 1912-14). He was also elected honorary president from 1933 until his death.

Your current search criteria is: Artist/Maker is "Adams Herbert".