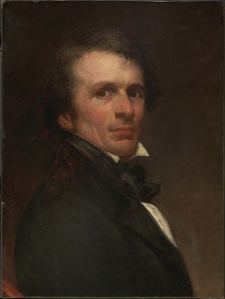 Francis Alexander was born in Killingly, Connecticut on 3 February 1800. (1) After studying briefly with Alexander Robertson in New York City, he began his career as a still-life, genre, and portrait painter in Killingly and Providence, Rhode Island. (2) In 1827 he moved to Boston where he soon became one of the cityâs leading portraitists, achieving honorary member status in the National Academy of Design in 1840. (3) When Charles Dickens arrived in Boston in 1842 to commence his five-month tour of the U.S., Alexander was honored to be the first to paint his portrait. (4) Alexander lived in Boston until 1853 except for a visit to Washington in 1830 and a trip to Italy from 1831 to 1833. (5) In 1853, the artist, his wife (nee Lucia Grey Swett), and their only child Esther Frances Alexander moved to Italy, where they stayed for the rest of their lives except for occasional trips back to the U.S. (6) Alexander initially settled outside Florence but soon moved to an apartment in the Piazza Santa Maria Novella. (7) He collected Italian primitives and painted little.
(1) New-York Historical Society, Dictionary of American Artists, 1564-1860 (New Haven: Yale University Press, 1957), 4.

(3) New-York Historical Society, 5, and Carol Troyen, The Boston Tradition: American Paintings from the Museum of Fine Arts, Boston (New York: The American Federation of the Arts, 1980), 102. The online Inventory of American Painting lists approximately 270 paintings by or attributed to Alexander. Most are in New England collections.

(4) Troyen, 102, debunks the myth bolstered by Longfellowâs assertion that Dickens was âAlexanderedâ by the artist on board his still-quarantined ship in Boston Harbor. She says the painter had written to the author in advance for permission to make the portrait. Troyen cites Catherine W. Pierce, âFrancis Alexander,â Old-Time New England 44 (Oct.-Dec. 1953), p. 41, regarding Henry Wadsworth Longfellowâs statement. Troyen goes on to discuss the rift that developed between Dickens and Alexander because the author believed the painter should not have exhibited his portrait locally and charged admission, a not uncommon event with the portrait of a celebrity at that time. In fact, Alexander was attempting to raise money to fund production and distribution of a large engraving of the paintingâanother common entrepreneurial move that could have upset Dickens.

(6) Stebbins, 353, indicates that Alexander taught his daughter to paint, and she created images intended to increase awareness of the plight of the poor. She also worked to preserve local traditions and folkways. John Ruskin published two of her manuscripts and called her Francesca, the name by which she was popularly known. Francesca led a sheltered existence, never married, and cared for her widowed mother into her own old age, dying a recluse and nearly blind.

Your current search criteria is: Artist/Maker is "Francis Alexander".