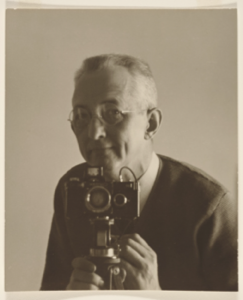 At the heart of Charles Sheelerâs creative spirit was a love of American material culture. As the art critic Forbes Watson confirmed in 1923, âEarly American furniture is one of Charles Sheelerâs admirationsâ¦. Moreover, in the cleanâcut fineness, the cool austerity, the complete distrust of superfluities which we find in some pieces of early American furniture, I seem to see the American root of Sheelerâs art.â (1) Sheeler possessed a keen sensitivity to clean, practical design, and to the beauty of everyday objects and structures. In his paintings and photographs, he preserved the rugged, no-nonsense attitude of American society in the first half of the twentieth century.

The postâWorld War I era saw the rise of the great urban and industrial landscape, which came to define the United States in the consciousness of its own citizens and the rest of the world. The style most closely associated with the depictions of such scenes was Precisionism. Its adherents used flat, hard-edged planes of color that are ordered and rational, not fracturing the subject, but providing a higher sense of clarity and purpose. The style was based upon the vocabulary of Cubism, which was familiar to all of the young Americans who had been to study in Paris or who frequented Alfred Stieglitzâs New York gallery â291.â Sheelerâs contemporaries Charles Demuth , Preston Dickinson , Niles Spencer , and Ralston Crawford are some of the other artists associated with this embrace of industrial America as a subject for art.

A disparate collection of teachers and interests contributed to Sheelerâs aesthetic sense. He studied industrial design for three years at the School of Industrial Art of the Pennsylvania Museum in his hometown of Philadelphia. After this practical training, he attended the Pennsylvania Academy of the Fine Arts for three years, studying with the great nineteenth-century teacher William Merritt Chase. But Sheeler was equally influenced by the American past and its productsâShaker furniture, architecture, and folk art and primitive glass and ceramics. In 1910 he rented a small house in Doylestown, Pennsylvania, and began to paint still-life compositions stripped to the barest essentials of line, color, and plane. Further, Sheeler embarked on a career as a professional photographer, doing commercial and advertising work while also pursuing photography as a creative medium. (2)

(2) Sheelerâs photography career and its relationship to his painting career is documented in Theodore E. Stebbins, Jr., and Norman Keyes, Jr., Charles Sheeler: The Photographs (Boston: Museum of Fine Arts, 1987).

Your current search criteria is: Artist/Maker is "Charles Sheeler".