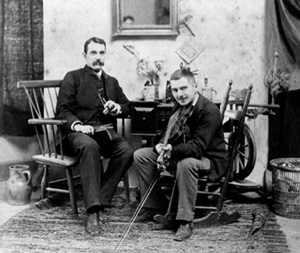 âIn painting from still life, I do not closely imitate nature. Many points I leave out and many I add. Some models are only suggestions.â
- William Harnett

In 1770, Sir Joshua Reynolds gave a lecture at the Royal Academy in London, explaining that the highest ambition of the still-life painter âis to give a minute representation of every part of those low objects which he set before him.â(1) Almost one hundred years later, an Irish-American painter created still-life paintings so true to life that their "minute representation" amazed and delighted contemporary viewers. Virtually forgotten until their rediscovery in the mid-twentieth century, William Michael Harnettâs trompe lâoeil paintings remain visitor favorites in museums across the country. In his compositions, Harnett reveled in depicting everyday objects such as books, pipes, tobacco, musical instruments and delicious edibles. These humble subjects often reflected the tastes of his patrons, who were not the art conoscenti of his time. His paintings were not intended to impress art critics and their populist quality appealed to many audiences.

William Michael Harnett was born in Clonakilty, County Cork, Ireland in 1848. His family immigrated to the United States when the artist was very young and they settled in Philadelphia. Harnettâs family was extremely poor, and as a result, Harnett was forced to quit school to help support his family, running errands and selling newspapers. In 1865, at the age of seventeen, he was apprenticed to a silver engraver. He first worked on steel, copper, and wood plates, eventually becoming an accomplished engraver of silver flatware. It was at this time that Harnett began his artistic study, attending art classes at the Pennsylvania Academy of Fine Arts.

Three years later, the artist moved to New York. He was employed by two large jewelry manufacturers, including Tiffany and Company, where he engraved monograms on flatware. At another of these firms, Wood & Hughes, Harnett shared a workbench with engraver William Ignatius Blemly, who became a lifelong friend. Harnett and Blemly exchanged engraved trinkets and it is through these objects that scholars came to know Harnett the craftsman.(2) Harnett spent eight years (1869-1876) in New York working as an engraver and pursuing art studies at night. Harnett attended the Cooper Union for the Advancement of Science and Art and the National Academy of Design in New York, and was able to make the critical transition from artisan to artist. While a specific course of study was not recorded, Harnett, like most beginning artists at the academies, probably first drew from casts of antique sculpture. Once an artist was deemed proficient, he was able to advance to more difficult classes such as drawing from life and begin training with a professional artist. Harnett did attempt to study in a private studio, but was disheartened by his experience. The artist wrote:

I ventured to take a course of lessons from Thomas Jensen, who was at that time a famous painter of portraits. I paid him in advance and intended to finish the course, but I couldnât do it. He didnât exactly say that I never would learn to paint, but he didnât offer any encouragement. After I had studied with him ten days, I asked him how a certain fault of mine should be corrected. I shall never forget his answer.
âYoung man,â he said, âthe whole secret of painting lies in putting right color in the right place.â
The next day I went back to my old way of study. (3)

A few works from this period, such as "A Sprig of Plums" (1873, National Gallery of Art), "Venus de Milo," (1873, Yale University Art Gallery), and "Study of Pipe and Other Objects" (1874, The Fine Arts Museums of San Francisco), foretell Harnettâs uncanny ability to recreate three dimensional objects on a two dimensional plane. "Plums" and "Venus" are remarkable charcoal studies that demonstrate the artistâs powers of observation in creating depth and volume through the use of light and shadow. "Pipe" is an oil on canvas study of various still-life objects. While his painting at the time was not as adept as his drawing, the objects (vase, glass, fruit, and onion) are seen repeatedly in later trompe lâoeil works. Harnett continued to labor at engravering and paint in the evenings until the mid-1870s, when his works began to sell and he was able to fully support himself through the sale of his art.

Although still life was regarded as a lower form of subject matter, Harnettâs work found tremendous popularity with wide audiences. They delighted in debating whether objects in his paintings were real or not. Harnett himself apparently delighted in this as well. In the unusual "Attention, Company!" (1878, Amon Carter Museum), Harnett depicts a young African-American boy in the roll of a soldier complete with newspaper hat and a wooden pole substituting for a rife. The boy stands in front a green wood background that has old, torn flyers âgluedâ to it with letters and numbers carved into the wood. The boy gazes intensely at the viewer. In the lower left hand corner, Harnett included in jest handprints in yellow paint, indicative of audiences touching the canvas to determine what is real.(4)

In 1886, Harnett exhibited "The Old Violin" (James H. Maroney, Jr.) at the Thirteenth Cincinnati Industrial Exposition. In the painting, a worn violin hangs by a string on a nail on a worn wooden door. Sheet music with peeling corners is âgluedâ to the door. A blue envelope and small newspaper square with peeling corners were also âgluedâ to the door. During the exhibition, it was reported that a guard was stationed next to the painting to prevent people from touching it and âattempting the removal of the newspaper scrap with their finger-nails.â (5) And in Theodore Stewartâs saloon on Warren Street in New York, where Harnettâs After the Hunt (1885, The Fine Arts Museum of San Francisco) was hung (unguarded), disputes about illusion and reality were often settled by touching the painting. After the Hunt depicted items such as a hat, bugle, gun, an ammunition bag, and a dead hare and pheasant along with other game.

Although his work found large audiences in the general public, the art critics did not look at his painting with a kind eye. In fact, they often reported Harnett to be a mere copyist. As a result, Harnettâs work was exhibited in non-traditional places, such as jewelry shops, drugstores, department stores, saloons, and industrial expositions. When his work was exhibited at the academies, it was often hung high in places that where the work was not easily viewed.

Harnett was also occupied with the theme of vanitas, a meditation on the vanity of human life and achievement, from early in his career. The most commons items included in these paintings were the skull and a snuffed out candle that represented the brevity of life. Art historian Chad Mandeles, in âGrave Counsel: Harnett and Vanitas,â explains that the artist may have adopted the themes from seventeenth-century Dutch painting, which Harnett could have seen at the Metropolitan Museum of Art in New York in the early 1870s. For example, Dutch painter Evert Collierâs "Vanitas" (1662), include a musical instrument, books, sheet music, and globe among other luxury objects that represent human effort. Harnettâs art seemed backward in relation to its time-âfine art was history and portrait painting, not still life. His work was more at home among seventeenth-century Dutch masters and the works of Pliny than it was in American academies.

However, art historian David M. Lubin presents an interesting argument against Harnettâs misplacement among the artists of his time. Harnett often wanted his modeled objects to show the mellowing effect of age. In his still lifes, items are worn, used, and well loved. He didnât want his works to have a sense of newnessâperhaps because it would lessen the effect of the âdeceptive illusionism.â The objects in Harnettâs paintings were reminders of bygone daysâemblems of supposedly simpler times. According to Lubin, Harnett was painting during the Gilded Age at the end of Civil War when the country was still recovering from devastation. The paintings of familiar objects and in some cases, of excess wealth, must have provided a sense of comfort.

By the end of the 1870s, Harnett had established himself as a painter and had secured a number of important patrons. For example, he created works specifically for Denis Gale, an English âpicture dealerâ who settled in Philadelphia around 1872, and for the renowned art dealer and collector, Thomas B. Clarke. By 1879, James S. Earle & Sons, a Philadelphia firm that sold paintings, engravings, sculpture, looking glasses and frames, began to sell his worksâa big step for an artist who was previously exhibiting in saloons and store fronts.

By 1880, Harnett was able to travel to Europe in order to study. Harnett arrived in London, and spent a few months there, presumably studying the works at the National Gallery. From there, the artist traveled to Germany. Although anxious to get to Munich (which at the time rivaled Paris in terms of its art scene), Harnett was held up in Frankfurt by a demanding patron. Finally arrived in Munich, he found that patrons were not in short supply. It was during this period that the Museumâs "Lobster and Pester Lloyd" (1882) was created. Harnett also painted more versions of "After the Hunt," one of which was exhibited at the prestigious Salon of 1885 in Paris. The following year, Harnett also submitted "Still Life" (1885, The Armand Hammer Museum of Art and Cultural Center, Los Angeles) to the Royal Academy, and enjoyed tremendous success in England and the continent. However, the artist soon became homesick and returned to the United States. Upon his return, he found that his work had been exhibited with increasingly higher price tags.(6)

One of Harnettâs best known works was painted just two years before his death and itâs rediscovery in 1935 led to a twentieth-century revival of interest in his work. In "The Faithful Colt" (1890, Wadsworth Athenaeum), a well-used pistol hangs on a nail secured into an old green wooden door. There are two rusty nails at the top left and lower right, along with a splintered hole where a nail was removed. The square newspaper scrap appears again in the lower right corner of the canvas. Harnett signed and dated the work as if they were etched into the wood. Perhaps the painting serves as a reminder to the bygone era of the Civil War or to those who fought and died for a cause. When Harnett died of kidney disease in 1892 at the age of forty-four, newspapers hailed him as a master. The "New York Times" lamented the loss of âone of the best known still-life painters in the countryâ; the "World" noted the âmany evidences of his geniusâ that were in New York collections; the "Boston Evening Transcript" described him as a âfamous still-life painterâ; and in Philadelphia, the "Evening Bulletin: mourned the death of âone of the greatest painters of âstill lifeâ in this country.â(7)

4) Attention, Company! has puzzled scholars as it is one of Harnettâs few portraits that incorporate elements of his still-lifes, such as the torn posters, newspaper, and graffiti and wooden green fence or door.

6) When Harnett first began selling his works, he sold them for around $50.00 each. He then increased the price to more than $150.00 and by the 1880s, collectors were paying in the thousands for his work. For more, see Doreen Bolger, âThe Patrons of the Artist: Emblems of Commerce and Culture,â in "William Michael Harnett," 1992.

Your current search criteria is: Artist/Maker is "William Michael Harnett".