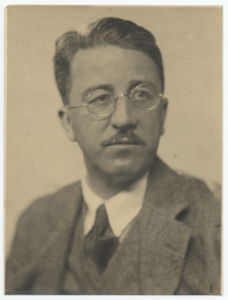 The painter Guy PÃ¨ne du Bois was a visual chronicler of upper class American urban life, taking his artistic cues from the vital locale and times in which he lived, and his own distinctive artistic heritage. As the critic Royal Cortissoz wrote in 1931, âThe atmosphere in which he grew up literary and sophisticated was one to turn him into a more or less caustic observer.â (1) The subjects of PÃ¨ne du Boisâ âcausticâ observations were the denizens of New York society, witnessed through a larger worldview that sharpened his understanding of the pretensions of Americaâs wealthy classes.

Guy PÃ¨ne du Bois was born in Brooklyn on January 4,1884. The son of journalist and bibliophile Henri PÃ¨ne du Bois, the artist was named after Guy de Maupassant, a famous French nineteenth-century novelist and short story writer. The scion of a French Creole family from Louisiana, Henri was an erudite man of letters who âencouraged his son to read and think, write and draw.â (2) He instilled in his son a lifelong admiration for Gallic cultureâas a child Guy spoke only French with his family

In 1899, Guy enrolled in the New York School of Art, where his first teacher, William Merritt Chase, was a highly experienced instructor whose bravura painterly style insured his successful career as an artist. Later, PÃ¨ne du Bois studied with J. Carroll Beckwith and Frank Vincent du Mond. Beginning in 1902, he entered the class of Robert Henri, one of the members of âThe Eight.â From Henri, PÃ¨ne du Bois learned to value both the âquality of paintâ and the âquality of the subject.â According to art historian Betsy Fahlman, in Henriâs classes there was less emphasis on brushwork than there had been in Chaseâs classes, and Henri taught his students that, âEverything in life is a subject, but it is not the subject that counts; it is what you yourself bring to it.â (3) PÃ¨ne du Bois advanced quickly and was appointed a teaching assistant. His understanding of Henriâs theories and his own predilection to communicate a sense of irony through his art led him to embrace realism for the rest of his career.

In April of 1905 Guy accompanied his father to Europe where the elder PÃ¨ne du Bois had been sent by the New York American newspaper to review exhibitions. The young artist enrolled briefly at the AcadÃ©mie Colarossi, and took private lessons from the painter ThÃ©ophile Steinlein, but spent most of his time exploring the city and experiencing the public life of its residents. He frequented the cafes, parks and other spaces or events where they gathered, and his art reflected his study of the social interaction of Parisians. Unfortunately, Henri PÃ¨ne du Boisâ became ill in May of 1906, and he died during the journey home in July of that year. The loss of his father, and his financial support, led Guy to take a job with his fatherâs old newspaper, the New York American as a reporter in order to earn a living. In 1908 he was assigned as an art critic for the paper and remained until 1912. He later wrote for other art publications, notably the magazine Arts and Decoration, where he was an editor between 1917 and 1921. His career as an art writer (and later as a teacher) was useful in providing for his family (he married Florence Duncan in 1911) but he chafed at losing the time to devote to his painting.

PÃ¨ne du Bois continued to work in his studio, however, and participated as fully as possible in the art world of New York City. He was a member of the Association of American Painters and Sculptors and helped with the organization of the Armory Show in 1913. Six of his own works were shown, and Kraushaar Galleries began to include him in group shows, as well as hiring him to write text for catalogues. (4) His paintings were small in scale and continued to demonstrate the influence of Henri with loose brushwork and subdued, neutral coloration. These works maintain the artistâs focus on incidents of social interaction in public places such as restaurants, art galleries and theatres.

In 1917, the artist received his first exhibition at the Whitney Studio Club, an exhibit space sponsored by Gertrude Vanderbilt Whitney that supported the work of contemporary American artists. By the 1920s his style had evolved away from that influenced by Henri and The Eight, to what is recognized as his typical later style: the figures tighter, more monumental and stylized, with stronger background coloration and a lighter palette overall. In 1924, he felt successful enough as an artist to abandon writing and teaching and move to France and pursue painting full time.

These years in France (1924 to 1930) were some of the most productive of his career. Living near Paris in the village of Garnes, he was close the city and its wealth of subjects, but his isolation helped him to focus on his work more intently. Throughout his life, PÃ¨ne du Bois suffered from an inability to budget his time and money, and was consistently in financial difficulty. Although his experience in France was stimulating, he was finally forced by the economic disaster of the worldwide depression of the 1930s to return to the United States to live and again take up writing and teaching. He participated in the government sponsored mural projects of the thirties, and this work, in addition to some portrait commissions, managed to keep the family afloat.

PÃ¨ne du Boisâ later years were bittersweet. He never achieved true financial security, but collectors and museums purchased his works, and he won a number of competitive prizes, including the First Altman Prize at the National Academy of Design and another from the Salmagundi Club. Despite this type of practical recognition, however, the art world had passed him by with the ascendancy of Modernism. He joined Edward Hopper, Isabel Bishop and a number of his contemporaries in founding a short-lived journal called Reality: A Journal of Artistsâ Opinions that was designed to promote the by then unfashionable style of realism. (5) He published his autobiography, Artists Say the Silliest Things, in 1940. After spending a final three years (1953-1956) in France with his daughter Yvonne, he died on July 18, 1958.