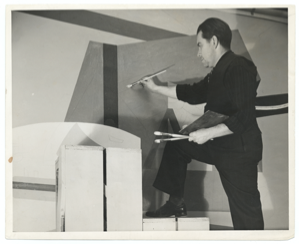 Modernism took root in America in the early twentieth century engendering the development of distinctive, vital variations on the predominant and ascendant European styles of cubism, surrealism and expressionism. Stuart Davis was one of the most original painters of this period, an artist who was grounded in the traditions of American realism, but, after discovering the overwhelming potential of the European avant-garde at the Armory Show in 1913, âresolved I would definitely have to become a âmodernâ artist.â (1)

Unlike many who met resistance to pursuing an art career, Stuart Davis found a clear path from the very beginning. The son of two working artists, he was encouraged to explore his heritage of creativity, and was nurtured along the way by a dedicated group of professionals. Helen, his mother, was a sculptor. His father, Edward, was the art director for the Philadelphia Press and included among his colleagues George Luks, William Glackens, Everett Shin and John Sloan, a group of painter/illustrators who later formed the core of the Eight (also known as the Ashcan School). In 1901, the Davis family moved to East Orange, New Jersey, and, after two years of high school, Stuart dropped out with his parentsâ blessing to study painting in New York with Robert Henri. Davis wrote in 1945, âIt is not unusual for artists to dwell on the obstacles they have had to overcome before gaining opportunity to study. But I am deprived of this satisfaction because I had none.â (2)

The tone of this observation, thoughtful and clever, was typical of Davis, whose legacy includes thousands of pages of writing, both public and private, on his philosophy of art and composition. More than most any other American artist, Davis articulated his goals and methods as a part of his artistic identity. The written record reveals an artist who was stimulated by the ferment of artistic changeâa basic shift from a reliance on realism in American painting, to the realization of abstraction as the primary mode of expression in twentieth-century art. It was significant, however, that he claimed to never have abandoned realism as the basis for his art, insisting that his abstractions were never purely formal, but were based on his unique experience of American life, landscape and culture.

Henri succeeded William Merritt Chase as New Yorkâs most important art instructor, and his teaching focused on the visual response of the artist to his environment. He sent his students out into the City to sketch and observe, and thus established the reputation of his followers in the Eight, who were known for gritty, un-idealized depictions of urban life. Davis initially painted in just such an urban realist style, until his exposure to abstraction led him to adopt modernism. He set himself the goal of mastering the two-dimensional picture surface and, in 1927, produced a series of works based upon a still-life set up that he used repeatedly as a subject. âI nailed an electric fan, a rubber glove and an egg beater to a table and used it as my exclusive subject matter for a year.â (3) The result was a series of abstract paintings that reduced the objects to pure planes, colors and spacial relationships. The following year he traveled to Paris, where he stayed for about a year, experiencing the works of the artists he most admiredâPicasso, Leger and Matisse among themâand painting stylized views of the cityscape.

During the Depression years, Davis was both an active artist (employed through the Public Works of Art Project, as well as the Federal Art Project until 1939), and a social activist, working specifically to improve the potential livelihood of artists. He was one of the leaders of the American Artists Congress, a political organization promoting a socialist agenda, and had also worked for three years as an illustrator for the Masses, a periodical dedicated to socialist causes. He was careful, however, to separate his political activism from his artâhe was critical of those artists who attempted to use their art to promote personal political beliefs.

As a mature painter, Davisâs style evolved into one of remarkable eccentricity and adventurousness, seen in ever more complex assemblages of abstracted shapes, and occasionally text, crowded onto shockingly colorful canvases. In his later paintings, representation of specific, recognizable subject matter was subsumed within compositions of shapes suggested by his experience of objects in space. His work, with its highly saturated color and rhythmic patterns of shapes, was consistently compared to and equated with the syncopation of jazz music, which Davis admired all his life.

Your current search criteria is: Artist/Maker is "Stuart Davis".