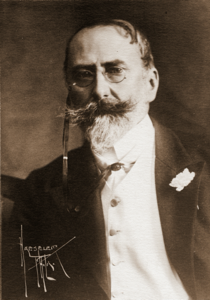 William Merritt Chase had a long and influential career as an American painter and teacher. He found fame as a portrait artist; however, plein-air painting influence in his career brought luminous landscapes into his oeuvre, and still life and interior scenes were also among his repertoire of subject matter.

In 1872 Chase entered the Royal Academy in Munich where he studied and worked with other American painters, particularly Frank Duveneck. Returning to New York in 1878, Chase developed his signature style that combined the luminous dark tonalities and adroit brushwork of the Munich school with the clear and vibrant color of the Impressionists. A trip to Paris in 1881had exposed Chase first-hand to European Impressionism from which he adopted a lighter, brighter palette and the use of bravura strokes. Subsequent trips abroad in 1884 and 1886 kept Chase abreast of the international trends in painting, and initiated into his work the use of contemporary subject matter, the love of plein-air painting, and the Japanese print influence of dramatic diagonals, high horizon lines, and cropped images. Chase however, never considered himself an Impressionist, regarding the term as descriptively too limited for his diverse oeuvre. (1)

Though he applauded and emulated the immediacy and the capture of the fleeting moment to which Impressionism aspired, Chase objected to the Impressionistsâ means of achieving it. He criticized them for being âmore scientific than artisticâ in their analyzation of light. âThere are no recipes for painting,â argued Chase. âIt is not only the light picture which succeeds; the dark, the black picture, in quiet tone is just as satisfactory.â Eclecticly, Chase drew inspiration from many sources, absorbing and combining influences of various artists to achieve an original and unique style which was never submersed in any particular one. Among his contemporaries he specifically admired John Singer Sargent, James McNeil Whistler, and the Belgian Impressionist, Alfred Stevens. Velasquez was also much admired by Chase, and it was to this Spanish artist that Chase attributed his own impressionistic approach.

In 1891, Chase formed the Shinnecock summer school of art, the first institution in America to teach plein-air painting (painting out of doors). (2) Located on the eastern end of Long Island near the village of Southampton, N. Y., the Shinnecock School stressed light and shade and a concern for atmospheric nuances. It remained in existence for eleven years until 1902, afterwhich Chase began a series of summer classes abroad that he conducted through the summer of 1913. In 1896, Chase had formed the Chase School of Art in New York, which later in 1898 became the New York School of Art. Chase remained as head instructor at the New York School until 1907 when he resigned this position to return to the New York Art Studentâs League, where he had begun his teaching career in 1878. Chase also taught at the Pennsylvania Academy of the Fine Arts from 1896 until 1909.

Throughout his career, Chase affirmed realism. He considered modernism to be âuntruthful, charlatanry, and diametricaly opposed to everything he stood for in American art.â (3) As a realist, Chase attempted to paint whatever was before him in a truthful, interesting, and artistic manner. Towards the end of a fifty year career, his art had begun to be associated with the past, and many of his students had left him for the modern camp. Interestingly, by the 1930âs some critics were applauding the abstract qualities of Chaseâs work and crediting him with having paved the way for modern art in America. (4) Chase was considered the most prominent painter of his generation, and by the beginning of the twentieth century, he was the most sought-after portrait painter in America after his friend John Singer Sargent. (5) William Merritt Chase espoused the cause of American art and worked relentlessly for its propagation and maturity. The painter Gifford Beal stated, âWhen the story of American art is finally told, Chaseâs name will be high on the list of the great.â (6)

Your current search criteria is: Artist/Maker is "William Merritt Chase".