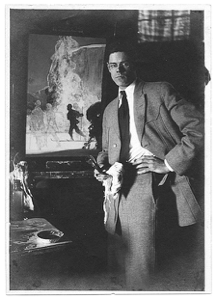 Charles Shepard Chapman, the second of three Chapman sons, was born in 1879 in Morristown on the banks of the St. Lawrence River in upstate New York.(1) After a few years, his family moved across Morristown Bay and into the old Ford Mansion. The large seventeen room house faced the Bay and was situated in the middle of twelve acres of lush green grass and trees, bounded by water on both sides â the river and the bay. This picturesque New England village had a large part in Chapmanâs life and later had an impact on his art.

Chapman attended the nearby Ogdensburg Free Academy and then went on to the Pratt Institute in Brooklyn where he first began to study art. He had sketched since he was a child, teaching himself by trial and error. Always with a sketchbook in hand, he literally made hundreds of sketches on various subjects and in multiple mediums. When Chapman graduated from the Pratt Institute, he attended William Merritt Chaseâs School of Art in New York. Unfortunately, little is known about his time spent there, except that he won First Scholarship prize in recognition of superior work done in his class throughout the year. Chapman then went on to the Art Students League, first to learn, and later to teach.

There is speculation that around this time Chapman met Frederick Remington, the renowned artist who so brilliantly captured the American West. It is unclear when or exactly where, however it may have been either in Cuba or New York. Around 1898, Remington was in Cuba documenting the Spanish-American War. There is a painting by Chapman of a Cuban village scene, however, it is undated, and it is unclear if Chapman was ever in Cuba. More than likely, the two artists met at some point in New York, after Remingtonâs return from Cuba. It is certain that the artists did meet as there is a portrait of Chapman by Remington in the Remington Museum in Ogdensburg. Also at this time, Remington encouraged Chapman to travel and paint, which lead to Chapmanâs decision of spending a year in a Canadian logging camp where he worked and painted.(2)

After his year in the Canadian woods, Chapman moved to Leonia, where he shared a studio with fellow artist Howard McCormick. Chapman then joined the Salmagundi Club, the oldest art club in New York. Founded in 1871, the club served as a gathering place for artists and still provides exhibitions, classes, and other art activities for the benefit of its members and the general public. Samuel T. Shaw (1861-1945), a member of the club and great patron of the arts in New York, encouraged American artists with $1,500 prizes each year that were awarded by a jury, with the prize winnerâs painting becoming Mr. Shawâs property. One year Chapman won the prize with his painting "Prophet."

Chapman primarily painted landscapes in a realistic style. For example, "In the Redwoods" (1924, J. Franklin Gallery, Snohomish, Washington) is a handsome landscape of redwoods and rocks at the bank of a river. Chapman also incorporated fishermen and rapids into his landscape, reminiscent of Winslow Homerâs fly-fishing watercolors from the Adirondaks. The artist also painted the Grand Canyon and scenes in Wyoming. Presumably Chapman traveled west to capture the landscapes; however, it is unclear when these trips may have been made.

Over the years, Chapman won a number of awards and exhibited at various institutions including: the Salmagundi Club, the Corcoran Gallery, National Academy of Design, Art Institute of Chicago, and the Pennsylvania Academy of Fine Arts. Chapman was an illustrator and illustrated a number of books including works by western author Zane Grey. He also established a school of illustration in Leonia with fellow artist Harvey Dunn.

Chapman loved to experiment with media. One series of works called water oils produced some of the most interesting paintings of his career. According to his wife, Chapman made a zink tank, 4 feet by 2 and 3 inches high to hold water. Then he used as many saucers as he needed for different colored paints, using turpentine as a medium and putting a bit of paint on each saucer. He then sprinkled paint onto the tank of water swirling the water to whatever position he liked, laying a piece of paper on top to absorb paint. After that he would pick up the paper, turn it to where a picture suggested itself, creating a water oil painting with pure imagination. (3)

Chapman showed the results to artist friends and received enthusiastic responses. As a result, in 1926, Chapman had a one man show of his water oils at the Art Institute of Chicago.

At some point in the late mid to late 1930s, Chapman began teaching at the Montclair Museum. Here he befriended a student, Helen Taylor, who was confined to a wheelchair due to muscular dystrophy. Chapman and the Taylor family became friends, and the artist was invited to join them in St. Thomas and the Virgin Islands. Mr. Taylor, Helenâs father, was commissioned by the Department of the Interior to travel to St. Thomas and St. Croix in order to teach the natives homesteading. While there, Chapman painted fourteen large paintings of life in the Virgin Islands, most of which are unlocated today.

In 1941, Chapman and his wife moved to Wyoming for a short period of time so that Chapman could teach at Wyoming University. It is not clear exactly when, but the couple returned to the northeast sometime after Americaâs entry into World War II. Wanting to do his part for the war effort, Chapman joined the Aircraft Radio Association working and assembling parts. His hard efforts were soon realized and he was put in charge of the assembly work. He later advanced to make detailed drawings of the radio parts. Unfortunately, little more is known about Chapman and his artistic career, especially the last twenty years of his life. What does exist is based on his wifeâs memoir and is not entirely accurate, and thus not completely reliable. The Museum will continue to research Chapman in hopes of uncovering more information about this talented American artist.

(1) Very little scholarship has been conducted on Chapman. The only documentation that exists of his life is a book written by his wife, Ada B. Chapman, entitled "Memoirs of Charles S. Chapman" (Durmont: Koval Press, Inc., 1964). While there is some information about his art, most of the book is recollections and anecdotes from family members.

(2) Ada Chapman reports that her husband spent time with Remington in Bermuda, as opposed to Cuba. She states that the two artists spent a great deal of time with each other. Remington admired Chapmanâs paintings, especially his color technique. It was then that Remington suggested he go to work at the Canadian logging camp. She states that Chapman was 23 at the time, meaning that he was in Bermuda with Remington sometime around 1900 or 1901. The problem is that Remington may have not actually been there. Remington was in Cuba in 1898 recording the Spanish-American War. By 1900, he was back in the United States traveling in the southern Colorado and New Mexico painting.

Image credit: Charles Chapman in his studio, about 1920, Photograph courtesy of the Archives of American Art, Smithsonian Institution, CC0

Your current search criteria is: Artist/Maker is "Charles Shepard Chapman".