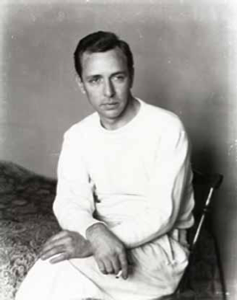 The simple, reductive early compositions of painter/photographer Ralston Crawford demonstrate his significance as an abstractionist of the early twentieth century. A full generation younger than the pioneering abstract painters associated with Alfred Stieglitz, such as John Marin and Arthur Dove, Crawford preserved their dedication to the basic purity of formal composition and the legacy of European Modernism. While many of his American contemporaries felt compelled by political and economic pressures to adopt polemical, figurative subject matter, Crawford embraced the real by abstracting it. As Barbara Haskell has written, âIn pursuing a geometric abstraction which was both expressive and rational he sustained an important current in twentieth-century American modernism.â (1)

Crawford was raised in Buffalo, New York. His father, a former captain of a cargo vessel on the Great Lakes, had moved his family there from Ontario in 1910 when Crawford was four years old. Upon graduation from high school, Crawford left for New York to study art, but ended up taking a job as a seaman, working his way on board ship through Central America and eventually settled in Los Angeles for two years of study at the Otis Art Institute. After a brief stint there as an illustrator for the Disney company, he made the decision to devote himself to fine rather than commercial arts. He returned to the East Coast and enrolled in the Pennsylvania Academy of the Fine Arts, in Philadelphia. His primary teacher, Hugh Breckenridge, also taught John Sloan, Marin, and Charles Demuth. Breckenridge, who espoused a bright, colorful, painterly abstraction, influenced Crawfordâs approach as much as his style. He emphasized the artistâs need to balance intellect and emotion, and Crawford later claimed that, despite the appearance of his canvases, he was ânever concerned with a pictorial logic to the exclusion of feeling. For me the shape relationships are only right when they feel right.â (2)

The most important formative experiences of Crawfordâs student years took place in suburban Merion, Pennsylvania, where he attended weekly talks held in the home of collector Albert Barnes. The artist later declared, âWhen I was a student at the Barnes Foundation, with its really superb collection, I was most attentive to the work of CÃ©zanne and Matisseâ¦. CÃ©zanne deeply affected my entire attitude toward painting.â (3) Barnes convinced the young artist that subject matter was irrelevant to the quality of a work of art, and that formal properties were the chief determinants of content. Specifically, Paul CÃ©zanneâs (1839â1906) reduction of architectural elements to planes and volume demonstrated to Crawford how three-dimensional form could be reconciled with a two-dimensional surface within a work of art. (4)

Like the Precisionist painters Charles Sheeler and Demuth, Crawford portrayed the industry and machinery of built America in his early works. The Precisionist vision had optimistic, utopian aspects, positing the science and technology of the twentieth century as symbolic of a progressive, democratic society. Inspired by Cubism, these artists submitted objects to a process of reduction, ultimately rendering them as elemental shapes with clean lines and sharp edges. Flat color and an absence of visible brushstrokes emphasize the subjectsâ inherent geometry. Like Sheeler, Crawford was also a photographer who used that medium to engage in a different mode of seeing. On a practical level, photography helped Crawford hone his compositions in other media, such as painting or lithography, to essentials. In other words, he began with a careful examination of objects in the world and, through a process of visual analysis and transformation, produced an abstracted representation.

Your current search criteria is: Artist/Maker is "Ralston Crawford".