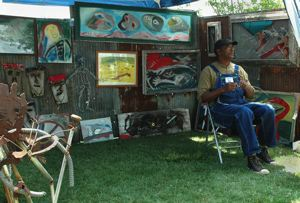 (1)Biographical information has been compiled from the following sources: Information on file, Montgomery Museum of Fine Arts, Montgomery, Alabama; Another Face of the Diamond: Pathways through the Black Atlantic South, INTAR Latin American Gallery, New York, 1989; The Voice Within: The Art of Charlie Lucas, Sloss Furnaces National Historic Landmark, February 1-March 18, 1991; Miriam Fowler, "Charlie Lucas", Outsider Artists in Alabama, Alabama State Council on the Arts, November 1991; Alice Rae Yelen, Passionate Visions of the American South: Self-Taught Artists from 1940 to the Present, New Orleans Museum of Art, 1993; Kathy Kemp and Keith Boyer, Revelations: Alabama's Visionary Folk Artists, Crane Hill Publishers, Birmingham, Alabama, 1994; Margaret Lynne Ausfeld, "Charlie Lucas. The New Breed", brochure for an ArtNow exhibition, May 4-August 18, 1996, Montgomery Museum of Fine Arts, Montgomery, Alabama; taped interview with the artist by Tara Sartorius, Curator of Education, January 16, 1997, on file at the Montgomery Museum of Fine Arts. (2)Fowler, 1991, pg. 32. (3)Glynda Klinger, "'Tin Man' is wizard in world of sculpture", Montgomery Advertiser, July 8, 1997. (4)"Our ancestors used the great knowledge. It's up to us to be diggin' and scratchin' to bring that knowledge back. Circles and wheels were very important to them, as signs, a lot of people didn't know what the heck was going on, but those circles and wheels always ended up in my work." (Another Face of the Diamond, 1989, p. 49); "I wanted the weaving technique to be in my work. That way, I can give the old ancestors the respect for what I learned from them. I use the old wheels a lot in honor of my great-grandfather, because he worked on wagon wheels and stuff. I had to make sure I could see them peoples again and again in my life, that I could look back and appreciate what they have did for me." (Kemp and Boyer, 1994, p. 118). (5)Lucas has given several explanations for the origin of this nickname. He has said that he chose it because he only had ten dollars in his pocket when he started as an artist, and because he works with tin and other metals, among other reasons (see the Montgomery Advertiser, July 8, 1997). (6)Videotaped interview with the artist by Tara Sartorius, January 16, 1997, on file, Montgomery Museum of Fine Arts, Montgomery, Alabama. In the interview Lucas talks about leaving the Tin Man behind when he leaves his workshop and crosses the road back to his house, where he becomes Charlie Lucas again. Similar comments can be found in most articles about the artist. (7)Pam Jones, "The Tin Man. Artist Molds Imagination into Metal Creatures", Alabama Journal, August 25, 1988, p. 20. (8)Videotaped interview with the artist, January 16, 1997. (9)Videotaped interview with the artist, January 16, 1997. Lucas has spoken of his work this way in all of the interviews and articles about his art. (10)Lucas has said that he chooses discarded materials because "I see myself as showing people that they are throwing away their lives" (The Alabama Journal, August 25, 1988, p. 21). (11)Kemp and Boyer, 1994, p. 122. "[Lucas] often starts a piece, works on it a few days, and then starts another piece.' That way, anytime I want to come out here and play with one of the toys, I got all the variety to play with. And I don't feel like I'm mass-producing the work.'"

Your current search criteria is: Artist/Maker is "Charlie Lucas".