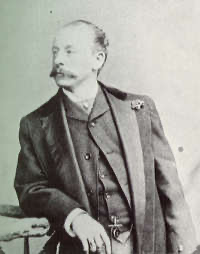 Alfred Thompson Bricher was a successful American painter of the last half of the nineteenth century who specialized in marine subjects. While he may have enjoyed some level of professional art training, when he began his career in about 1856 it appears that he was largely self-taught. (1) His early style was characterized and dominated by a literal, natural realism, most heavily influenced by the French Barbizon painters whose works were exceedingly popular in the United States at mid-century. Bricherâs seascapes were appreciated first for their âtruth to natureâ but also for the way in which he captured the elements of marine lifeâthe dramatic cycles of weather and tide that spoke of the power of the sea.

Bricher was a native of Portsmouth, New Hampshire, born April 10, 1837. Records of his early life are minimal, but he is believed to have relocated to Boston around 1851, and by 1859 he had a studio there. Extant paintings from this time period are largely bucolic views of landscape inspired by the naturalism of the Hudson River School. In the mid-1860s Bricher made at least twenty-one works that were reproduced by L. Prang and Company, the Boston printing house that pioneered the use of chromolithography for the reproduction of works of art. (2) These works were predominantly landscapes representing various seasons or times of day, and their use for popular print illustration confirms the wide appeal of that category of art.

Marine subject paintings had a long history in American art, dating from the Colonial period. Seafaring was closely linked with the commercial culture of Americaâs Eastern Seaboard, and the Atlantic coastline was an enduring source for imagery. Portraits of sea captains, specific ships, and harbors found an audience who sought to ratify the material success of the young American nation. In the early nineteenth century, many seascapes illustrated the aesthetic known as âthe Sublime,â with an emphasis on specific characteristics: the immeasurable, the uncontained and uncontrolled, as opposed to the structured and rational. Later works treated the sea as a worldly manifestation of the spiritual power of God contrasted to the ultimate powerlessness of man, the sea conveying at different times Godâs benevolence and his righteous wrath. (3)

Bricherâs development as a painter of seascapes was grounded in his love of plein air sketching, and an equal love for travel to seek out picturesque views. Early in his career he explored New England, the Hudson River Valley and the upper Mississippi River region, and subsequently, in 1868, he elected to relocate to New York City, most likely to be nearer the center of the nineteenth-century art market in America. Bricher married, and began to work toward building a career as a successful artist by joining a number of artists associations in New York: The Artistsâ Fund Society, The Brooklyn Art Association, The American Society of Painters in Water Colors, the National Academy of Design and, in the mid-1880s, the Art Union. In joining these organizations, he became a member of the âart establishmentâ of the time, and increased his acceptance within the existing art market structure.

The paintings exhibited by Bricher beginning in the 1870s reflect his concentration on marine subjects, with these works embodying the symbolism and spirituality that was central to earlier mainstream nineteenth-century landscape painting. He traveled extensively along the northeastern coast, from Maine down to Long Island, sketching and painting views of the sea. As he did so, his style evolved to reflect the increasing acceptance of Impressionism, with its emphasis on capturing the effects of time of day and weather. Although Bricher never adapted the broken brushwork of the Impressionist style for finished works, his oil studies were loosely painted and preserved the spontaneity of works made en plein air.

In the early 1860s, while still in Boston, Bricher had a studio in the same building as the painter Martin Johnson Heade, an artist known for his use of harmonious tonalities and light effects. Rather than the brushy surfaces of the Impressionists, which tended to dissolve form, Bricher came to embrace a more tonalist approach to composition, most likely derived from his knowledge of the Luminist painters such as Heade, and the work of James McNeill Whistler, whose Aesthetic style was also garnering attention in the late 1800s. The volume of works Bricher produced and sold was indicative of the popularity the artistâs subjects and their rigorous adherence to the truthful depiction of the natural environment. (4)

Your current search criteria is: Artist/Maker is "Alfred Thompson Bricher".