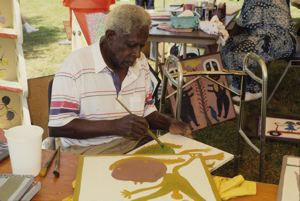 Though he has been interviewed frequently, details of Mose Tolliver's life are still sketchy and dates of many events are uncertain. Tolliver was born on July 4 around 1920 in Pike Road, Montgomery County, Alabama.(1) Tolliver's parents were sharecroppers so Mose grew up working in the fields and doing other farm chores. He attended school briefly in Macedonia, Alabama but dropped out after finishing the third grade. As a young man he hauled and sold vegetables, worked as a gardener, painted houses and did other odd jobs. He also served in the Army for six months.
In the 1940s, Tolliver married Willie Mae Thomas. They had 14 children, 11 of whom are still living. In the late 1960s, while working in the shipping department of McLendon Furniture Company, Tolliver was crippled by a falling box of marble. Since he could no longer work, he took up painting to pass the time. His former boss offered to pay for painting lessons but Tolliver decided to teach himself instead. By the mid 1970s, he was painting regularly and trying a variety of subjects. Around the same period, his work was discovered by Montgomery artist, Anton Haardt and by Mitchell Kahan, former curator of the Montgomery Museum of Fine Arts. Both Haardt and Kahan helped bring Tolliver's art to public attention.
By the early 1980s Tolliver's work had developed a following among folk art collectors and museums. In 1981 the Montgomery Museum of Fine Arts held a show of Tolliver's work. The following year some of his paintings were included in the show Black Folk Art in America, 1930-1980 at the Corcoran Gallery where Tolliver met Nancy Reagan. By the mid 1980s there was such a demand for Tolliver's work that he could not produce enough to keep purchasers satisfied. He hired his daughter Annie to duplicate his work and then signed the paintings as his own. Annie began working independently in 1989. Several other Tolliver children also have recently begun to paint.
Tolliver's wife, Willie Mae, died in 1991. Currently, Tolliver still lives on Sayre Street in Montgomery, Alabama. He continues to paint, though not as regularly since his health is poor.
Tolliver's works have appeared in exhibitions at the Corcoran Gallery of Art in Washington, D. C., the Michael C. Carlos Museum in Atlanta, the Montgomery Museum of Fine Arts, the Museum of American Folk Art in New York, and the Setagaya Art Museum in Tokyo as well as at a number of galleries throughout the southeast and eastern United States. His works can be found in public and private collections all over the world and in a number of art books and magazines including Smithsonian.
Tolliver prefers to work with house paint on plywood boards, though he has also painted chairs, suitcases, tabletops, trays, a piano and other surfaces. Since the artist cannot stand and paint at the same time due to his dependence on crutches, the maximum size of a painting is generally determined by what can be handled comfortably while seated. Tolliver typically uses a palette of three unmixed colors though there is often some inadvertent mixing since Tolliver does not clean his brush between colors or wait for one color to dry before applying the next. Color schemes are determined by the artist's personal choice rather than in an attempt to imitate reality. If there is an imperfection in the surface he is painting, he generally incorporates it into his work rather than discarding the painting.(2) Tolliver generally "frames" his pictures by painting a black stripe around the border and he uses beer and soda can poptop rings as hangers. His works are signed "Mose T" with a backward "S".
Tolliver has said that he paints quickly, usually taking about half an hour to produce a finished picture. He prefers to work early in the morning or late at night. He generally works while sitting on his porch or in the bedroom sitting on his bed and holding the surface to be painted in his lap. He also sometimes places the object on the floor and paints bending over from a sitting position. Because he has to paint sitting down, Tolliver often has to rotate a painting during its creation, painting some of the image while the work is upside down.
Tolliver's earliest paintings were generally of birds though he quickly began painting a variety of landscapes, animals, and people including heroic or well-known figures such as Martin Luther King, George Washington and Nancy Reagan. He has also created a number of self-portraits and an assortment of pictures of "moose ladies" and "ladies on scooters" which are female figures with legs spread, poised in mid-air or straddling pointed or phallic-shaped vertical bars attached to wheels. Though Tolliver has painted portraits and some other images from photographs, he usually invents his imagery and then uses it repeatedly.(3) Generally, his paintings consist of flat centrally placed subjects surrounded by a contrasting field of color. His compositions tend to be fairly simple and colorful and fill the picture plane, often pressing up against the borders. His figures are generally frontal, though their faces may be in profile, and have stylized features.
Though Tolliver's works are simple in form and presentation they are rich in fantasy, symbolism, and humor. There are also strong sexual undertones to many of his works most notably in his paintings of women and their phallic scooters that Tolliver calls "jick-jacks".(4) Mitchell Kahan has suggested that Tolliver lives out fantasies in many of his paintings and has pointed out that others have a deep haunting spirituality, particularly his self-portraits.(5) Tolliver's paintings express a range of emotions as well as commemorating important events in his life and providing an outlet for a lively imagination. His subjects are often enigmatic because they are based on a complex personal symbolism.

(1)The year of Mose's birth is given variously as 1917, 1919 and 1920. Most recent accounts use 1920. Biographical information has been compiled from the following sources: Information on file, Montgomery Museum of Fine Arts, Montgomery, Alabama; Robert Bishop, Folk Painters of America, E. P. Dutton, New York, 1979; Mitchell D. Kahan, Mose T, Montgomery Museum of Fine Arts, December 12, 1981-February 7, 1982; Chuck and Jan Rosenak, Museum of American Folk Art Encyclopedia of Twentieth-Century American Folk Art and Artists, Abbeville Press, New York, 1990; Betty-Carol Sellen, 20th Century American Folk, Self Taught, and Outsider Art, Neal-Schuman Publishers, Inc., New York, 1993; Alice Rae Yelen, Passionate Visions of the American South: Self-Taught Artists from 1940 to the Present, University Press of Mississippi, 1993; Kathy Kemp and Keith Boyer, Revelations: Alabama's Visionary Folk Artists, Crane Hill Publishers, Birmingham, 1994. (2)"Rather than discard a damaged surface, he will incorporate its imperfections into the work itself. These are the decisions of a person who is used to getting by with very little money, yet also indicate a person responding intuitively to his context rather than trying to impose his educated bias upon it. " (Sandra Langer in Art Papers, April-May 1982). (3) "At first I was looking into books to find out how to paint things and then someone told me that was bad and I should just paint whatever is in my head." (Mose Tolliver as quoted in the Montgomery Advertiser, May 1, 1991). (4)Mitchell Kahan has suggested that these images "[have] to do with Mose's identification of life forces (sex) with play and humor." See letter from Mitchell Kahan, July 29, 1997, on file, Montgomery Museum of Fine Arts. (5)Kahan, 1981. Kahan has also cited the titles of Tolliver's works and the names he gives to objects in his paintings as evidence of fantasy in his work.

Man on a Scooter

Your current search criteria is: Artist/Maker is "Mose Tolliver".