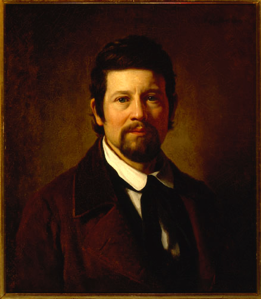 Jacques Guillaume Lucien Amans was one of a group of French-speaking artists important to the portrait tradition of the lower Mississippi Valley. Born in Maastricht, Netherlands (Belgium) in 1801, Amansâ early training was in France, probably at the Ecole des Beaux Arts in Paris, after which he exhibited in the Paris salons from 1831 to 1837. (1) Amans' arrival in New Orleans is recorded in 1836, the date he supposedly bought the sugar plantation, Trinity, and the date of his earliest known portrait. His decision to come to New Orleans was possibly influenced by his contemporary, Jean Joseph Vaudechamp, a French-born portrait painter who had prospered in New Orleans. Both had exhibited at the same Paris Salons, traveled to New Orleans on the same ships (1836 and 1837), and occupied studios in the same block of Royal Street. Like Vaudechamp, Amans spent the winter months in the city and painted the portraits of prominent New Orleanians. To avoid the yellow fever season, Amans and his family spent the summers away from the city, visiting his plantation, those of other Louisiana planters, or returning to France. Amans was considered the most prominent portrait painter in New Orleans during the 1840âs and the early 1850âs. (2)

Amans' only known works are from his New Orleans residency, consisting of approximately seventy-five paintings of which only a third are signed. (3) Both this composition and its style are reminiscent of the work of French portraitist Jean Auguste Dominique Ingres (1780-1862), whose outstanding draughtsmanship focused on the face and hands of the sitter to convey personality. Ingres' faces are generally well-defined by strong shadows and contours, and softened edges that blend into a dark background.

In 1840, Amans painted a seated, three-quarter-length portrait of General Andrew Jackson, who, aged and ailing, traveled to New Orleans to celebrate the twenty-fifth anniversary of the Battle of New Orleans. Several versions of this work were done by Amans, who also collaborated with Theodore Moise on an equestrian portrait of Jackson which won a $1000 prize from the city. (4) In 1848 Amans went to Baton Rouge to paint from life a seated portrait of Zachary Taylor. An unusual non-portrait work is the Ascension of St. Joseph, painted by Amans for the St. Augustine Church in 1846.

In 1856 Amans and his Louisiana-born wife of French descent, left New Orleans for France. They never returned to the southern port. Perhaps fearing war or civil unrest, they left their real estate and finances in the hands of agents and settled in La Cour Levy, near Versailles. Amans died in Paris in 1888.

Portrait of J. A. Rozier

Your current search criteria is: Artist/Maker is "Jacques Amans".