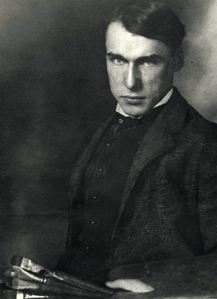 If the term âentrepreneurâ applies to any American artist, it certainly applies to Walt Kuhn. The business of art, particularly its social and political aspects, seems to have been as critical to Kuhnâs artistic identity as the work he produced over a career that spanned some fifty years. He is perhaps best known as one of the three key organizers, with Arthur B. Davies and John Sloan, of the 1913 Armory Show, the exhibition that introduced European avant-garde art to the larger public and opened up new expressive avenues for American artists.

Kuhn began life in Brooklyn as the son of a Bavarian father, Francis Kuhn, and a Spanish mother, Amelia BarbÃ¢s Kuhn. His parents managed the International Hotel on the Erie Basin waterfront, and Kuhn grew up in a colorful, ever-changing setting. Seeking to finance his art training, Kuhn became a jack of many trades, at different times working as a commercial photographer, a real estate salesman, and a professional bicycle racer. He eventually acquired both training and a career when he became a cartoonist, first for a San Francisco newspaper, the "Wasp", and later for New York magazines such as "Life", "Puck", "Judge", and "New York World". He studied art in Paris and Munich between 1900 and 1903, and upon his return to New York, he set about making the connections that would further his fine-art aspirations and allow him to minimize the cartooning that was his primary source of income.

It was the world of the theater and the circus fascinated Walt Kuhn from the earliest years of his life. His mother, Amelia BarbÃ¢s Kuhn, first introduced him to the theatrical environment that she loved. (1) Later, as a young man, Kuhn worked for a sporting goods store that rented costumes, and his tasks included making deliveries to performers backstage. When he became established as an artist, Kuhn worked tirelessly as a planner of large private theatricals. In 1917 he founded the Penguin Club, which had annual theme parties with skits he delighted in organizing. Eventually he incorporated this enthusiasm for performance into his art, becoming well known for his portraits of performers in costume.

Kuhn was never an artist in search of a subjectâhe was too much of a raconteur to lack for materialâbut throughout his career he searched for a style. He studied in Paris and Munich as a young man. He worked under the Munich instructor Heinrich von ZÃ¼gel (1850â1941), a landscape and animal painter, until 1903, and in Europe he encountered Post-Impressionism and the rising new movement, German Expressionism. Upon his return to the United States, Kuhn exhibited with the more progressive of the urban realist painters such as Robert Henri and John Sloan. However, his role in helping to organize the Armory Show of 1913 gave him direct contact with European avant-garde trends, and thereafter he sought to banish the realist influence from his work. One scholar observes, âHe opened himself up to many influencesâPicasso, Matisse, Dufy, Derain, the German Expressionistsâbut his personal style did not immediately evolve.â (2)

Kuhn eventually eschewed abstraction and remained a representational painter. Blocky forms, blank backgrounds, and saturated colors, as well as the subjects' expressions and other details do suggest underlying meanings beyond reportage. (3) Kuhn believed that all painting, even abstract work, had a narrative basis, and he sought to tell stories based on his observations and feelings. (4)

(4) The artist wrote: "Abstraction must begin with a physical fact, and most sincere painters admit this to be true. Art is based on story. Perhaps the story gets started by the sight of a potato, or a woman's knee, but sure as sure the beginning impulse comes from a physical fact. After that it depends upon what the artist does with the fact." Ibid, p. 108.

Your current search criteria is: Artist/Maker is "Walt Kuhn".