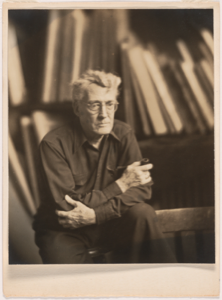 John Sloan was a member of the group known as The Eight, formed in New York in 1908. That year, when The Eight held an exhibition at the Macbeth Galleries, marked the beginning of a significant era in American painting. Dedicated to a common goalâthe representation of modern life without idealization or pretensionâthese men were also linked by friendship and mutual respect.

Like members Robert Henri, William Glackens, Everett Shinn, and George Luks, Sloan worked in Philadelphia prior to moving to New York. In 1890 he began producing illustrations for books, calendars, and greeting cards, while also taking an evening drawing course at Philadelphiaâs Spring Garden Institute. After a year as a freelance illustrator, in 1892 Sloan became an artist-reporter for the Philadelphia Inquirer, illustrating news stories and making drawings for feature pages and Sunday supplements. Here he became acquainted with Glackens, Shinn, and Luks, artists who likewise trained as illustrators. At a studio party, Sloan met Henri, who would prove a major influence on his development as an artist. Sloan became a regular attendant at Henri's studio gatherings and helped him organize informal drawing sessions and social opportunities for art students. (1) Henri encouraged Sloan to continue painting and to experiment with a variety of themes. During the 1890s, Sloan's technique, choice of subject, and artistic philosophy closely paralleled Henri's, and it was through him that Sloan developed an enthusiasm for the monochromatic palettes and earthy realism of Frans Hals, Diego VelÃ¡zquez, and the subjective, moody tonality of James McNeill Whistler.

Sloan began exhibiting his paintings in 1900, participating in annual exhibitions such as those sponsored by The Art Institute of Chicago, the Carnegie Institute, and the National Arts Club, among others. (2) In 1901 he met and married Anna M. (Dolly) Wall, and the couple moved to New York, where Sloan began working as a freelance illustrator for Century Magazine, Colliers, Harperâs, McClures, and The Saturday Evening Post.

Although Sloan began his career as an illustrator, he hoped to establish himself as a fine artist. He worked diligently and exhibited regularly, but he initially had little success in marketing his work; in fact, he did not sell his first painting until 1905, and sales remained sporadic throughout his life. Sloan was a talented and fastidious etcher, producing throughout his career illustrations for newspapers, magazines, and books while also creating etchings as artworks in their own right. (3) For the most part, these prints sold better than his paintings and provided a steady, although insufficient, source of income. However, his role in helping Robert Henri organize The Eightâs exhibition at the Macbeth Galleries in 1908 established his name in the art world. He further solidified his reputation as a leading figure when he helped put together the 1910 âExhibition of Independent Artistsâ and participated in the Armory Show in 1913.

In 1910 Sloan became deeply involved with the Socialist Party, running for the New York State Assembly as a Socialist and becoming art director of the Socialist magazine The Masses in 1912. He resigned from the party in 1916, disillusioned and frustrated by disputes over the use of his art as propaganda. He had done little painting during his years with The Masses, but almost immediately following his resignation from the Socialist Party, his painting career began to accelerate again. In 1916 he was offered a solo exhibition at Gertrude Whitney's Studio Club, and he began teaching at the Art Students League, where he would remain for seventeen years. He also began exhibiting regularly with the Kraushaar Galleries and became involved with the Society of Independent Artists. By the early 1930s, Sloan had finally become a leading American painter and teacher. Despite a long and influential career, however, he never enjoyed public success.


(1) Sloan and Henri met in late 1892, and were leaders of the Charcoal Club, a cooperative of forty-three artists who met to sketch and receive criticism, particularly from Henri, who was then teaching for the Philadelphia School of Design for Women. See William Innes Homer, Robert Henri and His Circle (Ithaca, NY, and London: Cornell University Press, 1969), pp. 72â73.

(2) Sloan had received public notice for his work as a designer of posters (an offshoot of his illustration activity) as early as 1894. He began to paint oils in 1896, but did not formally show them until he exhibited Walnut Street Theater (1900, John Sloan Trust) at The Art Institute of Chicago in October 1900. David Scott, John Sloan: Paintings, Prints, Drawings (New York: Watson-Guptill Publications, 1975), pp. 24â35.

Your current search criteria is: Artist/Maker is "John Sloan".