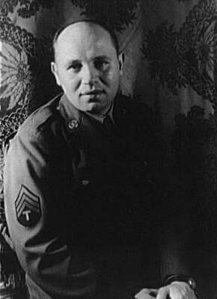 On September 2, 1911, Fred Romare Harry Bearden was born in Charlotte, North Carolina, to (Richard) Howard and Bessye Johnson Bearden. Following the birth, Jim Crow laws made the Beardensâ life in Charlotte more and more difficult, and around 1914, they moved to New York City where Romare Bearden remained for the majority of his life. After a few years in the city, the family permanently settled in Harlem, their home becoming a gathering place for many writers, musicians, artists, and intellectuals associated with the Harlem Renaissance.
Romare Bearden entered the New York public school system in 1917. After starting high school in the city, he moved in 1927 to live with his grandparents in Pittsburgh. Two years later, Bearden graduated from high school in Pittsburgh, after which he enrolled in college. He transferred colleges two times, from Lincoln University in Pennsylvania to Boston University to New York University, graduating from the latter in 1935 with a Bachelor of Science in Education. During college, Bearden took numerous art courses and created many illustrations for university publications, the national magazine Collierâs, and The Crisis, the activist journal of the National Association for the Advancement of Colored People (NAACP). Also around this time, he became a student of the German-born artist George Grosz at New Yorkâs prestigious Art Students League.
From the mid- to late 1930s, Bearden worked for the New York City Department of Social Services, while continuing to explore his growing artistic passion at night and on weekends. He visited the Museum of Modern Art exhibition African Negro Art for a tour led by Professor Charles Seifert, a scholar and collector of African art. He became involved in the Harlem Artists Guild, the New York Public Libraryâs Harlem Art Workshop, and the Harlem Community Art Center. But the organization most important to Beardenâs early artistic career was an informal group of artists, writers, musicians, and dancers who met at 306 West 141st Street. The artists associated with this group varied greatly in style, media, and beliefs, providing Bearden with a forum to exchange ideas and develop as an artist. As the 1930s drew to a close, Bearden became increasingly devoted to painting, and like many Depression-era artists, primarily portrayed urban genre scenes in dark, muddy palettes. He began to show such pictures in group exhibitions at the Harlem YMCA and Harlem Community Art Center, and in May 1940, had his first solo show.
In the same year as this solo exhibition, Bearden rented a studio alongside painter Jacob Lawrence, writer William Attaway, and poet Claude McKay. This year also marked Beardenâs first trip back to North Carolina in fifteen years. He visited family in Charlotte and Greensboro and then travelled further south to Atlanta, Georgia. An article published years later stated that Bearden made the trip to paint images of the South, but no works exist to support the claim. The trip seemingly provoked a change in Beardenâs work, however, as he began to experiment with gouache on brown paper. These compositions reflect the social realist concerns evident in Beardenâs earlier work, but diverge in their display of a richer, earth-toned color scheme and more abstract, flatter style. In 1942, Bearden temporarily quit practicing art to join the army.
Bearden was honorably discharged from the army in May 1945, soon after which he returned to his job at the Department of Social Services and to his work as an artist. Over the next few years, galleries and museums throughout the Northeast and South acquired, exhibited, and sold Beardenâs paintings, and he enjoyed increasing artistic recognition. His work moved further into abstraction with forms becoming more geometric and his palette brighter. Toward the end of the 1940s, Bearden concentrated on studying and deriving designs from works by Italian and Dutch masters, as exemplified by his many paintings of biblical themes from this period. In 1950, following the path of generations of American artists, Bearden travelled to Paris.
Bearden lived in Paris for roughly four years, studying at the Sorbonne and Institut Britannique under the G.I. Bill. He spent much of his time in the Parisian cafÃ©s and visiting with artists including Constantin Brancusi, Georges Braque, and Jean HÃ©lion. While abroad, Bearden journeyed to Italy, specifically Genoa, Milan, Florence, Pisa, Sienna, and Rome. Inspired by his experiences in Europe and his study of Cubism and Surrealism, Bearden returned home in 1954 and, with the encouragement of his new wife Nanette Rohan, resumed painting. His paintings from the late 1950s showcase a continued devotion to abstraction as well as his recent interest in Zen Buddhism. But in the 1960s, Beardenâs artistic style made its ultimate transition when he discovered the medium of collage and began to reintroduce figural elements into his work.
In 1963, fourteen African-American artists met in Beardenâs studio to form an association that came to be called Spiral. Spiralâs agenda, as described by journalist Jeanne Siegel, was to determine âwhat should be their attitudes and commitments as Negro artists in the present struggle for Civil Rightsâ and how to play a part in that struggle. For Spiralâs only group show, Bearden contributed Conjur Woman (1964), one of his many photostatic enlargements made during this period from small collages composed of magazine and newspaper clippings and images from his collection of art reproductions. Titled Projections, this series displayed identifiable imagery of African-American figures in domestic rural interiors and urban spaces alongside animals, musical instruments, and other objects. Beardenâs photographically enlarged collages received considerable critical acclaim when first exhibited in the mid-1960s, and by the late 1960s, they were the basis for collagraphs, lithographs, and screenprints.

Financial artistic success enabled Bearden to retire from the Department of Social Services in 1969 and dedicate himself completely to creating and exhibiting his art. Perhaps the most significant of these exhibitions was the Museum of Modern Artâs Bearden retrospective âThe Prevalence of Ritual,â a title that also refers to his series of collages based on biblical themes, jazz music, Pittsburgh and New York, and his childhood home in Mecklenburg County, North Carolina. Throughout the 1970s, Bearden continued to show his collages in the countryâs leading galleries and museums, travel abroad with his wife Nanette, and become elected to many prestigious art organizations such as the National Institute of Arts and Letters and the New York State Council on Arts. In addition, Pratt Institute, Carnegie Mellon University, Davidson College, and Hoffstra University all awarded him honorary doctorates in fine arts around this time. In 1982, amid the national celebration of Beardenâs artistic career, his health began to deteriorate.
After 1982, Bearden continued to produce collages, as well as prints, watercolors, and occasionally murals, of themes rooted in his childhood and cultural experiences. His pace, however, declined as the decade progressed, and in January 1988, he entered New York Hospital where he died two months later of bone cancer. In the lengthy New York Times obituary, journalist C. Gerald Fraser wrote, âRomare Howard Bearden was one of Americaâs pre-eminent artists. Success, in the form of artistic recognition and financial reward, came early and, subsequently, the art establishment chose him as its favorite black artist and gave him influence and power.â

Back Home from Up the Country

Your current search criteria is: Artist/Maker is "Romare Bearden".